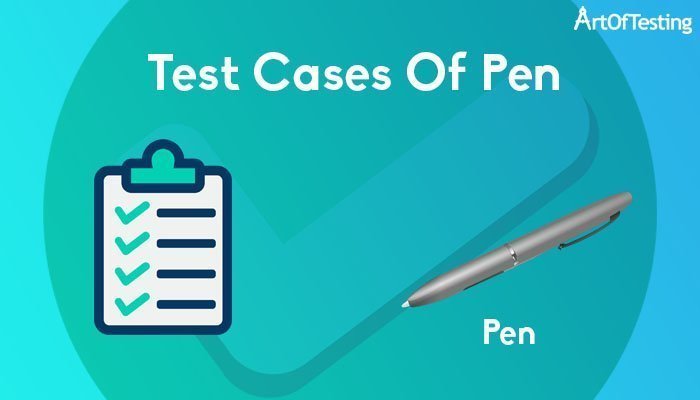 Hello Friends! In this post, we will study – how to write test cases for Pen. Going through these test cases will not only help you in your testing interviews but will also help you in understanding the process of test case creation which you can utilize while creating test cases of any kind of application.

Since the focus is to check and cover the different features to be tested instead of the creation of formal test cases, so the following can be considered as test scenarios also.

For the exact difference between test cases and test scenarios, check our post – Difference b/w Test Case and Test Scenario. For a formal test case document template, you can refer to our post – Test case template (download Xls).

Now, without further delay, let’s begin with some sample test cases of pen categorized on the basis of different types of testing.

These test cases cover the testing of the Graphical User Interface of the application to be tested which is Pen in our case.

Functional test cases are the test cases that involve testing the different functional requirements of the application under test.

The negative test cases include test cases that check the robustness and the behavior of the application when subjected to unexpected conditions.

Performance test cases include the test cases that help in quantifying or validating the performance of an application under different conditions.

Thanks for making it to the end of this tutorial. I hope by now, based on these sample test cases for pen, you must have got a fair idea of the test case creation process. Understanding these would help you in creating the test cases of actual software applications.

If you feel, we have missed some test cases, please let us know over the comments. We will add them to our list.