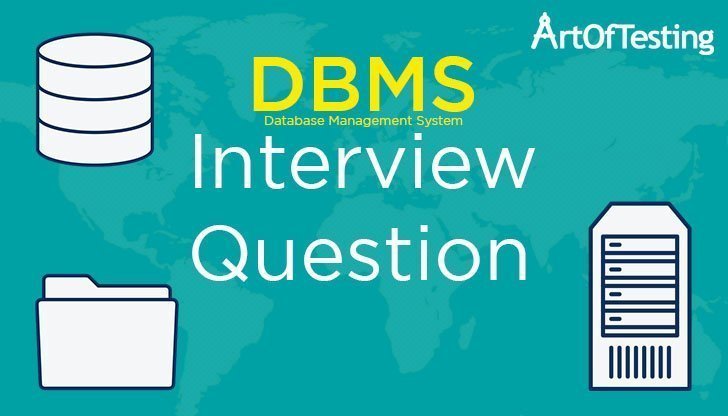 Ques.1. What is a database?
Ans. A database is a structured collection of data for faster and better access, storage and manipulation of data.
A database can also be defined as a collection of tables, schema, views, and other database objects.

Ques.3. What is RDBMS?
Ans. An RDBMS or Relational Database Management System is a type of DBMS having relationships between the tables using indexes and different constraints like primary key, foreign key, etc. The use of indexes and constraints helps in faster retrieval and better management of data within the databases.

Ques.4. What is the difference between DBMS and RDBMS?
Ans. The primary difference between DBMS and RDBMS is, in RDBMS we have relations between the tables of the database. Whereas in DBMS there is no relation between the tables(data may even be stored in files).
RDBMS has primary keys and data is stored in tables. DBMS has no concept of primary keys with data stored in navigational or hierarchical form.
RDBMS defines integrity constraints in order to follow ACID properties. While DBMS doesn’t follow ACID properties.

Ques.5. What is a table?
Ans. Tables are the database object that is used for storing related records in the form of rows and columns.

Ques.6. What is the field in a table?
Ans. A field is an entity used for storing a particular type of data within a table like numbers, characters, dates, etc.

Ques.7. What is a tuple, record or row in a table?
Ans. A tuple or record is an ordered set of the related data item in a table.

Ques.8. What is SQL?
Ans. SQL stands for Structured Query Language, it is a language used for creating, storing, fetching and updating of data and database objects in RDBMS.

Ques.11. Explain DML commands. What are the different DML commands in SQL?
Ans. DML refers to Data Manipulation Language, it is used for managing data present in the database. Some of the DML commands are-select, insert, update, delete, etc.

Ques.12. Explain DCL commands. What are the different DCL commands in SQL?
Ans. DCL refers to Data Control Language, these commands are used to create roles, grant permission and control access to the database objects. The three DCL commands are-

Ques.13. Explain TCL commands. What are the different TCL commands in SQL?
Ans. TCL refers to Transaction Control Language, it is used to manage the changes made by DML statements. These are used to process a group of SQL statements comprising a logical unit. The three TCL commands are-

Ques.14. What are SQL constraints?
Ans. SQL constraints are the set of rules that impose some restriction while insertion, deletion or update of data in the databases. In SQL we have both column level as well as table level constraints which are applied at columns and tables respectively. Some of the constraints in SQL are – Primary Key, Foreign Key, Unique Key, Not NULL, DEFAULT, CHECK and Index constraint.

Ques.15. What is a Unique constraint?
Ans. A unique constraint is used to ensure that the field/column will have only a unique value(no duplication).

Ques.16. What is a Primary Key?
Ans. A primary key is a column or a combination of columns that uniquely identifies a record in the database. A primary key can only have unique and not NULL values and there can be only one primary key in a table.

Ques.18. What is a composite key?
Ans. A composite key is a primary key with multiple columns as in the case of some tables a single field might not guarantee unique and not null values, so a combination of multiple fields is taken as the primary key.

Ques.19. What is a NULL value?
Ans. A NULL value in SQL is an unknown or blank value. Since NULL is unknown value so, the NULL value cannot be compared with another NULL value. Hence we cannot use ‘=’ operator in where condition with NULL. For this, we have an IS NULL clause that checks if the value in the field is NULL or not.

Ques.20. What is a Not Null constraint?
Ans. A Not NULL constraint is used for ensuring that the value in the field cannot be NULL.

Ques.28. What is the difference between cross join and full outer join?
Ans. A cross join returns cartesian product of the two tables, so there is no condition or on clause as each row of tabelA is joined with each row of tableB whereas a full outer join will join the two tables on the basis of condition specified in the on clause and for the records not satisfying the condition null value is placed in the join result.

For example – for a table with Employee and Project fields, if we want to fetch Employee working on a particular project P2, we will use ‘where’ clause-

Now if we want to fetch Employees who are working on more than one project, we will first have to group the Employee column along with the count of the project and than the ‘having’ clause can be used to fetch relevant records-

Ques.31. Define the ‘Select into’ statement.
Ans. Select into statement is used to directly select data from one table and insert into other, the new table gets created with the same name and type as of the old table-

Ques.32. What is a View in SQL?
Ans. A view is a virtual table, it is a named set of SQL statements that can be later referenced and used as a table.

Ques.38. Explain Boyce and Codd Normal Form(BCNF).
Ans. BCNF is the advanced or stricter version of 3NF.
For each functional dependency X -> Y-
X should be the super key

Ques.41. What are locks in SQL?
Ans. Locks in SQL are used for maintaining database integrity in case of concurrent execution of the same piece of data.

Ques.46. What are cursors in SQL?
Ans. Cursors are objects in SQL that are used to traverse the result set of a SQL query one by one.

Ques.47. What are the stored procedures? Explain their advantages?
Ans. Stored procedures are SQL procedures(a bunch of SQL statements) that are stored in the database and can be called by other procedures, triggers, and other applications.

The advantages of stored procedure are-

Ques.48. What are the triggers in SQL?
Ans. Triggers are special types of stored procedures that get executed when a specified event occurs. Syntax-

Ques.49. What are orphan records?
Ans. Orphan records are the records having a foreign key to a parent record that doesn’t exist or got deleted.

*Remember: Delete with joins requires name/alias before from clause in order to specify the table of which data is to be deleted.