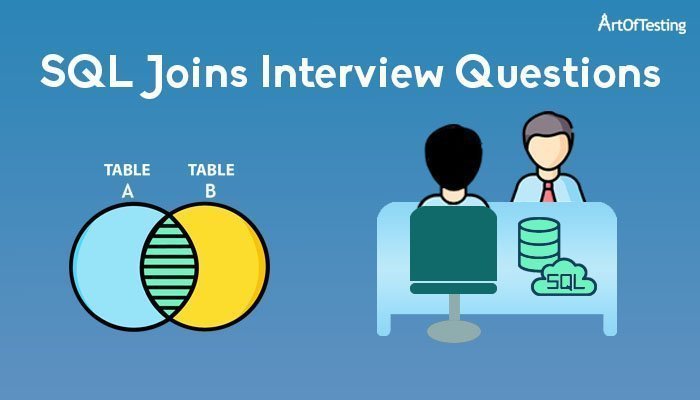 SQL Joins are one of the most commonly used concepts while working with multiple tables. For this reason, interview questions based on SQL joins are frequently asked during the interviews involving SQL.

In this article, we have compiled top SQL joins interview questions (starting with the basic ones) that you should prepare for the interviews. So let’s begin.

Ques.1. What are Joins in SQL?
Ans. Joins in SQL are the statements or clauses using which we can combine two or more tables, based on some common fields present among the tables.

Ques.2. Explain the different types of Joins in SQL?
Ans. Some of the major joins in SQL are-

Ques.3. What is the difference between Inner and Self Join?
Ans. A Self join is a type of Inner join.
Inner join is used to return the records which are present in both tables. Whereas, in self join, a table is joined to itself.

Ques.4. What is the difference between Full Join and Cross Join?
Ans. A Full Outer Join is a combination of a Left Outer and Right Outer Join. It returns all rows in both tables that match the query’s WHERE clause, and in cases where the ON condition is not satisfied, it puts NULL values.
Whereas, a Cross join produces a cartesian product between the two tables, returning all possible combinations of all rows.

Example – In the below two tables the Employee and Department tables have a common field ‘EmpNo’. So, in the case of natural joins, we don’t need to mention the On clause over the ‘EmpNo’ field of both the tables.

Ques.6. What is an Equi Join?
Ans. An Equi Join is a type of join that combines tables based on matching values in the specified columns.

Ques.7. What is a non-equi join?
Ans. A non-equi join is a join in which join conditions use conditional operators instead of equals operator. Syntax-

Ques.8. What is the difference between cross join and natural join?
Ans. A cross join produces a cross product or cartesian product of two tables whereas the natural join is based on all the columns having the same name and data types in both the tables.


Ques.9. How are Joins different from the Union clause?
Ans. Some features of Joins are-

Whereas in case of Union-

Ques.10. Write the SQL command to join 3 tables.
Ans. Consider the below 3 tables. Now in order to fetch EmpName, DeptName, Gender information of all the employees, we will join the 3 tables.

This completes our article on top SQL joins interview questions. We hope, these questions will help you in your interviews.