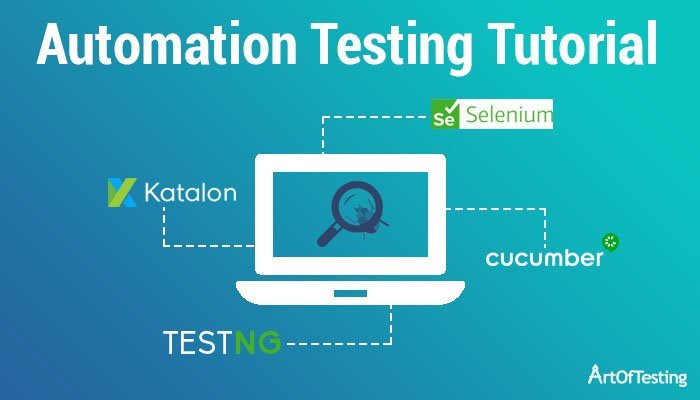 Skip to our tutorials on automation testing tools directly.

Before starting with Automation Testing, let’s first understand the term – “automation”. Automation is a process using which we can automate a manual process with the use of technology. The aim is to eliminate or reduce human/manual effort. Now let’s see, how automation helps in software testing.

Testing software includes writing test cases once and then executing them again and again, whenever required.

The test execution, when performed manually is a very time-consuming and tedious task. Automation testing helps in reducing the test execution time. As the test scripts written once can be run automatically any number of times without any human intervention.

What is Automation Testing?

So, basically, it automates the manual testing process. The tester writes test scripts and then runs the test scripts either on-demand or schedule them for periodic executions. This reduces the overall testing time, thus helping in faster product releases.

Now that we know what exactly is Automation testing, let’s check which test cases to automate. Or, what all test cases are ideal candidates for automation.

1. Test cases that test critical functionality of the application

For example for an e-commerce application, the critical functionality would be the product discovery via search and category pages, add to cart and then buy functionality. So, these test cases should be first chosen. Test cases for add to wishlist and notify me etc should be of lower priority. Hence should be picked accordingly for automation.

There are many test cases or application flow that require performing an action again and again. Such test cases are also ideal candidates for automation as automation reduces a considerable amount of testing effort.

Take an example of a search feature of an application. If we can automate the flow to search with a search term and then verify that search results. Then we can run the same script again and again with different types of search terms like – single word, multi-word, alphanumeric, with special characters, with foreign language characters, etc.

3. Tests that are time-consuming

Workflows that require a considerable amount of time to execute and set up are also ideal candidates for automation.

Let’s take the example of e-commerce application forward. If some test cases require the set up of multiple products and then performing some operation on those products. Such test cases when automated not only reduce the test execution time but also, free the manual testers of the redundant task. In addition. helping them focus on other exploratory testing activities.

There are scenarios that require checking the concurrent access to the application e.g. in the case of performance testing with multiple users. In such cases, either manual testing is not feasible or it would require a lot more resources to test the particular scenarios. In those cases, automated scripts help by creating concurrent requests and collating results in one place.

What not to Automate?

It is also important to understand, what sort of test cases cannot or rather should not be automated.

GUI or the Graphical User Interface test cases should best be left for manual testing or human validation. This is because even with the slightest change in the UI, the test cases would fail. Moreover, it is also very difficult to create reliable UI test cases across multiple devices and screen resolutions.

Rather than ‘should not’ it is the case of ‘cannot’ automate. Usability test cases, test application’s ease of use by different sets of users which, with the current technology is not possible to automate.

3. Functionalities that are rarely used and take time for scripting

It is good to automate complex scenarios but investing your effort in scenarios that would rarely be used doesn’t provide a good Return on Investment.

When should we Automate?

After defining, all the capabilities of the automation suite during Test Planning, we can begin the automation framework creation activity in parallel with the development team. But the scripting of the test cases should be done at the right time.

Following are some of the advantages or benefits of automation testing-

When not to Automate?

Let’s see some scenarios, where it is not advisable to do automated testing along with some disadvantages of automation.

The automated testing process includes all the set of activities that are performed during the automation of different software applications. We will learn each phase from the requirement understanding to the automated scripting and the CI-CD integration phase.

Defining the scope of automation is finding the right test cases for automation. This would include all the types of test cases that fall under the test case types defined in the “What to Automate?” section of this article.

Tool selection depends on various factors like – the requirement of the project, the programming expertise, project budget (whether to go for the free or paid tool), etc.

After the automation framework set up, we start the scripting of test cases, selected for automation. A typical script for a web application test case looks like this-

Although we can run the test cases on demand but nowadays CICD – (Continuous integration and continuous delivery) is widely used in almost every product or service-based company. From a testing point of view, this involves setting up the test suites on a CICD tool like Jenkins.

Once set up, we can then schedule a nightly test suite run or run on test cases on demand. Another major benefit of integrating the automation suite with the CICD pipeline comes when we can trigger the test cases automatically for execution after the deployment. In this setup, in just one click, just after the deployment, the automation test suites check the stability of the build.

To handle and implement all such practices, we develop an automation testing framework. Following are some of the most widely used automation frameworks-

Modular frameworks are one of the basic automation frameworks in which the commonly used functionalities database connection, login flow, method to read data from an external file, etc are identified and created as methods. While scripting instead of writing the line of code, again and again, we simply call the reusable methods wherever required.

The framework will already have the methods defined for each keyword used, like – there will be automation code for OpenBrowser keyword, NavigateTo keyword, etc. In this way, once the framework is set up even a non-technical user can create automation test scripts in plain text.

The software market is full of paid and free test automation tools. Based on the various factors like – project requirement, budget, the expertise of the resources, etc, we should choose the right tool, suited for our needs. The following are some of the most popular test automation tools in the market.

Selenium is an open-source test automation tool. It has a very large and active community. It has the maximum market share among all the popular tools and supports scripting in multiple languages – Java, Python, Ruby, Javascript, C#, etc. Download link – Selenium Download

A fairly new tool but rapidly getting popular due to record and playback features along with scripting for more technical users. It is free but not open source.

A paid tool by Microfocus that can be used for automation of both Web and Windows applications. It supports scripting in VBScript only.

A paid tool provided by Smartbear can be used for automation of Web, Mobile as well as Desktop applications.

It is a paid tool by Tricentis that provides record and playback features for automating web applications, APIs, and windows applications. It is considered one of the most popular codeless automation tools that can completely eliminate the need for scripting.

Watir (Web Application Testing In Ruby) is an open-source automation tool that can automate web applications in Ruby. It has a watir-webdriver component that is based on Selenium.

It can be considered as Selenium for mobile applications. Just like Selenium, it is open-source and has a large user base.

TestProject is a free and community-powered automation testing tool by Tricentis. It can be used for the automation of both web and mobile applications.

For more details, you can check our post – Top Test Automation Tools containing in-depth review, tool’s features, download link, and our recommendations of the different tools.

Our Tutorials on Automation Testing Tools

Now, that you have a fair understanding of the test automation process, you can select the right tool for learning automation. For this, I would highly recommend you to go through the post – Roadmap for transition from Manual to Automation QA. After that, you can check our below-mentioned tutorials on popular test automation tools.

I hope this article helped you in understanding the automation testing basics. Also, you would have understood the different activities performed in the test automation process.