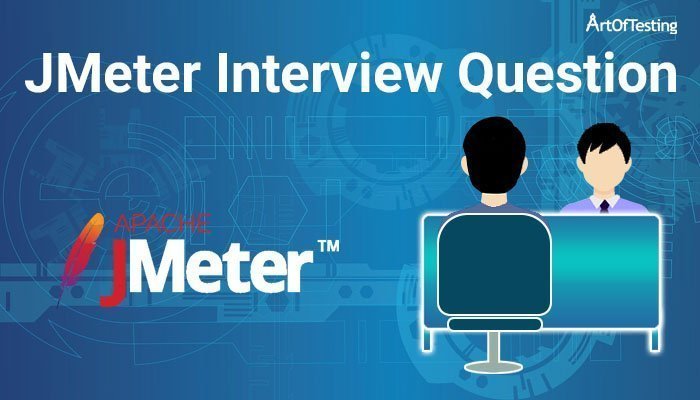 Here, we will cover both theoretical as well as practical interview questions on performance testing and JMeter.

Ques.1. What is Performance Testing?
Ans. Performance testing is a non-functional type of testing in which the application’s performance is evaluated under expected or higher load. It is done before the application is deployed on production to ensure that it doesn’t crash and responds within standard/acceptable time at real load.

Ques.4. What is JMeter?
Ans. JMeter is an open-source performance testing tool developed in Java. It can be used for carrying out performance testing of web-based applications, web services(both SOAP and Rest), FTP server, Databases, LDAP server etc.

Ques.6. Explain the internal working of JMeter.
Ans. JMeter simulates real-world user load by creating multiple threads making concurrent requests to a target server. After that, it displays the performance of the server in the form of tables and graphs.

Ques.9. How can we record performance test scripts in JMeter?
Ans. JMeter has HTTP(S) Test Script Recorder using which we can perform operations on a browser and the HTTP requests get recorder in JMeter.

Ques.10. Do we need to learn coding to create scripts in JMeter?
Ans. Script creation in JMeter is somewhat different from normal automated script creation. Mostly, a script can be created by recording or using JMeter UI. Followed by parameterization of tests, correlation, and configuration of different test parameters.
Having said that, coding is required in some scenarios and can be done with Beanshell scripting.

Ques.11. JMeter is Java-based. Can we use it to do performance testing of application implemented in other platforms/languages like .Net?
Ans. Yes, we can test web applications developed in other languages and platforms using JMeter.

Ques.13. Explain parameterization in JMeter?
Ans. Parameterization is the process of parameterizing the user input or other test inputs. So as to use different values for different users and loop iterations. For instance, an external CSV file can be created with multiple login credentials and then passed to the load test script in order to fetch different credentials for each iteration.

[For more details, refer to the post- Parameterization in JMeter]

Ques.14. What is correlation?
Ans. Correlation is the most important aspect of scripting in JMeter. It includes fetching dynamic data from preceding requests/calls and passing them to the subsequent requests as parameters. For example, we can extract the values of session variables from the response of the request with login details and then pass those values to the subsequent requests (thus handling the sessions). [For more details, refer to the post- Correlation in JMeter]

Ques.15. What is a Test Plan?
Ans. A Test plan in JMeter is a logical container that contains all the test elements which constitute the performance test. Some of the different elements in a test plan are – Thread Group, Samplers, Timers, Assertions, Listeners, etc.

Ques.16. What is Workbench?
Ans. A Workbench in JMeter is a temporary area of storage for the test elements. It also contains non-test elements like HTTP Proxy Server, which can be configured to record scripts via browser in JMeter. Any element placed in the workbench doesn’t get saved after with the test plan’s JMX script.

Ques.17. What is a thread group in JMeter?
Ans. A Thread Group is an element of a JMeter test plan that represents a pool of virtual users performing a set of operations.

Ques.18 What is a test fragment in JMeter?
Ans. A test fragment is a special type of controller in JMeter whose sole purpose is to provide code reusability capability in the test plan. It is like a Thread Group. But is not executed unless it is referenced by either a Module Controller or an Include_Controller.

Ques.19. What is the ramp-up period?
Ans. At the beginning of the load test of an application instead of putting all the users live, we slowly ramp up the number of users in order to study their effect in the application’s performance. In JMeter, the ramp-up period defines the time period within which all the specified users get in running state.

Ques.20. What are samplers in JMeter?
Ans. Samplers in JMeter are used for sending different types of requests to the server. Some of the commonly used samplers are – HTTP Request, JDBC Request, SOAP-XML Request, JUnit request, TCP Sampler, etc.

Ques.22. What is a JTL file in JMeter?
Ans. The test results in JMeter is saved in the form of JTL files. JTL is an acronym for JMeter Test Logs.

Ques.23. What are the different timers in JMeter?
Ans. Timers are used for halting the test execution of a thread for a certain predefined time. In addition, these timers are used for simulating the real user think time. The different types of timers available in JMeter are – Constant Timer, Gaussian Random Timer, Uniform Random Timer, Constant Throughput Timer, Synchronizing Timer, Beanshell timer, BSF Timer, etc.

Ques.25. What is a Rendezvous Point?
Ans. The Rendezvous point in JMeter is used to perform spike testing. It is performed using “Synchronizing Timer” by waiting until the number of active users reaches a certain specified value during the load test.

Where,
n specifies that JMeter will run in non-GUI mode
-t for test script file
-l for jtl file having each sample’s result

Ques.32. How can we reduce the resource requirement in JMeter?
Ans. To make the best out of the available resources and in general as a practice, the following practices should be incorporated in the tests-

So, if there are 10 samples then 90%line will be 9.5 or 9. It means the 9th value in the sorted list of samples (sorted according to ascending order of their response times).

In JMeter, we can do distributed load testing using the master-slave configuration.