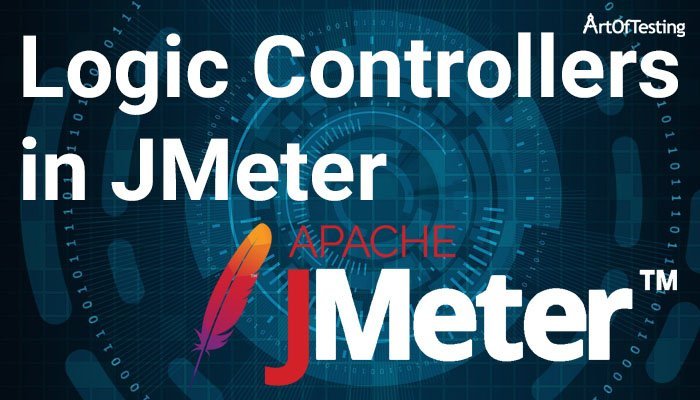 In the previous tutorial, we studied about Samplers and different types of Sampler requests available in JMeter. In this tutorial, we will be studying about Logic Controllers that customize the way different requests are sent to the server.

Logic Controllers are the Test Plan elements that are used to customize the order of processing of Samplers and other elements added as child. Primarily, Logic Controllers are used with Sampler requests to perform various customization like – altering their order of processing, grouping them as a single transaction or running the requests in loop etc.

Why do we need Logic Controllers?

Performance test scripts are used to simulate the actions of real users. Just like a real user will perform multiple actions in different fashion like perform a set of operations sequentially(e.g. navigate from login page to home page), perform similar types of operations in a loop(e.g. reading multiple unread mails), perform some random operations etc. For simulating these different types of actions, JMeter provides us different types of Logic Controllers which customize the element processing inside them.

This is a newly added controller in JMeter. It ensures that the child elements of this controller are accessed by only one thread at a time.

This controller is used to perform the requests in a loop, based on the values of a set of related variables.

Using If Controller, we can specify a condition whether the child element inside it will run or not based on a condition that should evaluate to true or false.

The Include Controller can be used to provide modularity in JMeter. Using this controller we can add an external .jmx file(a test fragment) to our existing script by loading the jmx file in the Include Controler’s control panel.

Interleave Controller allow us to pick and execute a single child element out of multiple child in each loop iteration. For example- if we have three samplers added as child to an Interleave Controller than the in first iteration it will pick the first sampler request, in next iteration it will pick the next one and so on. Once the child elements are over, it again starts iteration from first element.

It allows to execute the operations specified as child elements in a loop with iteration value specified in its control panel.

The once only controller is used in situation where we would like to perform an operation only once even if the operation is executed in a loop.

The Random Order controller is used to execute each of its child element at most once in random order.

This controller acts as a placeholder where the scripts recorded using HTTP Proxy Server are recorded by default(for details on Record and Playback in JMeter check our tutorial).

This controller is just a placeholder for grouping and ordering the different elements of the test plan.

The Throughput Controller is used to control the processing of its child elements in terms of the total number of executions or the percentage of execution specified in its control panel.

The Transaction Controller is one of the widely used controller in JMeter scripts. It is used to group multiple sampler requests into one. The response time and other performance metrics of the test result are evaluated for the whole transaction. For example – while checking the performance of home page of an application, we can notice that launching the home page generates numerous requests at the backend. Hence, this requires grouping all these request into one transaction, for this, we have a transaction controller in JMeter. Once we run the script, we can find the overall response time of the whole transaction.

The While controller is used to run the child elements inside it till the value specified in its control panel is evaluated to false.

This concludes the logic controllers in JMeter tutorial, please share it with your friends and colleagues. Check out the complete JMeter tutorial here.