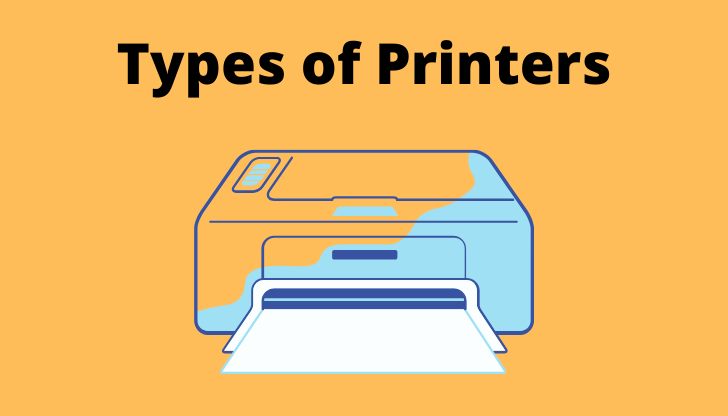 A computer is incomplete without its output unit. One of the most common output devices of a computer is a printer. The monitor displays the output on the screen whereas a printer helps in obtaining the output as a hard copy. The printers have evolved helping to create clearer texts, images, and other graphics. In this article, we will discuss different types of printers that have been used over time.

What is a Printer?

A printer is an output peripheral device that is used to create permanent texts or graphics on paper.

There are mainly two types of printers – impact and non-impact printers. Let us discuss them one by one.

Such printers have mechanical components that are always in direct contact with the paper. The ink ribbon inside the printer is pressed against the surface of the paper. The ink gets transferred on the paper and that is how it gets printed.

The daisy wheel printer is one of the oldest types of printer. The name is derived from its resemblance to a daisy flower. It first emerged in the 1970s and was used inside word processors, computers, and electronic typewriters.

The construction was quite simple, with a plastic/metal disc attached to pre-formed letters, numbers, and characters attached all around it. A motor is attached to the disc to rotate it. This disc is positioned between a hammer and the ink ribbon.

Each time hammer hits the disc the particular character is dipped into the ink ribbon and then onto the paper to print. This daisy wheel is replaceable. One can choose a wheel with different font and size and replace the existing wheel with it.

These printers were quite slow and noisy and were quickly replaced by the laser printers later.

The dot matrix printer is another type of impact printer and resembles the daisy printer. It consists of pins with characters attached to them. These characters are made of small dots hence the name. these pins are arranged in single or multiple vertical rows.

The pinhead (containing all the pins) moves and strikes against the ink cloth onto the paper. In this manner, characters get printed. This type of printer is outdated as well due to low-quality print and high cost.

The only advantage of these printers is their ability to print multiple copies of text at the same time by carbon copying.

These printers are much quieter and faster and therefore are most in use right now. The different types of non-impact printers are-

The inkjet printers do not get in direct contact with the paper. Instead, small droplets of ink are shot towards the paper through an orifice and the print head is moved along the paperback and forth speedily as well.

This is how a text or an image is formed on the paper. Liquid inks are used for printing purposes. There different variations in the inkjet as well like Piezoelectric Ink-Jet and thermal Ink-Jet. The Inkjets are reasonably faster and have a smooth application on the paper. The biggest advantage is that they are affordable.

Laser printers are the electrostatic type of printers. These are used to create high-definition print by using laser technology. A laser beam is directed towards a negatively charged cylinder to create an image that is to be created.

This role collects electrically charged powdered ink and then transfers the image to the paper. The roll is heated so that ink fuses on the paper permanently. The 3 main reasons laser printers are being used widely are-

Other than this, laser printers are smear-proof due to the use of laser technology instead of ink roll. The quality of the print is also high which makes laser printers even more desirable.