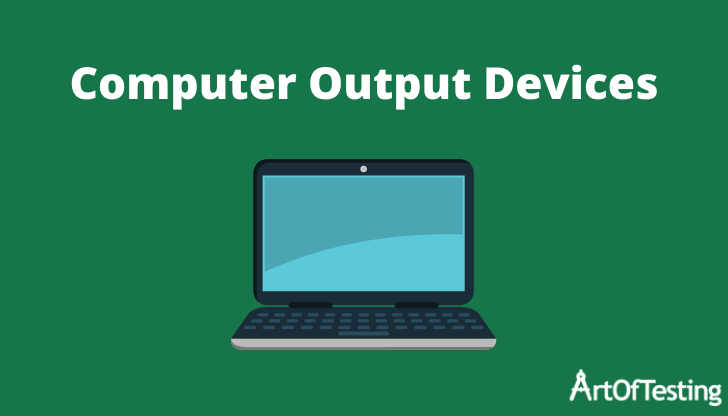 A computer is an electronic device that is used to store, display and manipulate data given by the user. A computer can only work when all its components – input unit, output unit, storage unit, and processing unit work together in sync. Here we will talk about the output unit and its devices.

What is an Output Device?

Difference between Input and Output Devices

Input devices – The computer input devices convert the data entered by the user into binary language and send it to the computer to process it. For example, keyboards, mice, scanners, etc.

Output devices – The output devices are peripheral devices that are used to convert the output processed by the computer into human-readable form. These devices either display the output on the screen, print on paper or through any other form. Examples: printer, monitor, projector, headphones, etc.

Examples of Output Devices of Computer

Let us look at some of the output devices one by one.

The monitor is an output device that displays the output in the form of images on a digital screen. The images formed are made up of millions of tiny dots called pixels. The more pixels, the better resolution of the image is.

Earlier monitors had screens made of CRT, but are now replaced by flat panel displays. Let us understand how both are different from each other-

CRT – The CRT or cathode ray tube is the structure behind the screen. That helps to display characters and images on the monitor. the display side consists of a phosphorescent screen. The screen lights up when a beam of electrons hits the screen from the cathode filament. The electrons are deflected and accelerated and that is how the images are formed on the screen.

However, the CRT based monitors have their disadvantages, which include-

Printers are another peripheral device used as output devices. The output from the computer is achieved on paper from the printer. The data gets printed on paper which can be both colored or black and white, an image, text, or even both.

The printer can be majorly divided into two types-

The audio or sound produced by the computer is in the form of electric signals. These are perceived by us in the form of sound using the output device, headphones. The headphones are transducers that convert electrical energy into mechanical energy and thus help us listen to songs and recordings on the computer. The best thing is that they are light and thus portable, unlike heavy computer speakers.

Computer speakers are output device that works the same way as a headphone. They make our entertainment experience easier. We can watch movies, listen to music, recordings, or any audio with help of speakers. They can be used instead of headphones when multiple people want to listen to the audio.

The projector is an output device, that is used to project the image displayed on the computer monitor on a large wall or screen. This is a good option when the output is to be shown to a large number of people. It can be used to watch movies with friends, or show a presentation in a group meeting.

The projector is connected to the computer using HDMI cables or VGA cables. The output from the computer is taken as input by the projector. Nowadays, traditional blackboards are also getting replaced by smart screens, which use projectors to display images and videos to the students for better understanding.

The GPS device is a device used for navigation purposes that are connected to satellites and help in determining the location of the device connected. Think it of as an interactive screen that displays our device’s location on a map. This map is movable and can be used to find any location on the earth.

The sound card is an expansion card used in computers to connect input-output devices. It is either integrated. The sound card audio ports are visible on the side or back of the computer, where you can connect any device like a keyboard, headphones, speakers, and microphones. Each sport is specifically designed for each type of device. The primary function of the soundcard is used to play any audio, record audio, connect joysticks or controllers for gaming purposes, and speakers to listen to music or any sound.

A plotter is an output device that works similarly to a printer, but for large vector graphics. The lines are made on paper using a pen or any other such tool mechanically by the plotter. These devices are used to print large high resolution, vector-based graphics, such as those used in architectural firms. They also prove advantageous as they can draw not only on paper but on varied types of surfaces like plywood, aluminum sheet, plastic, etc.

The only drawback is that they are quite expensive and require much larger space than normal printers.

The SGDs are augmentative and alternate communication systems used to produce synthesized audio to help people with hearing and speech impairment. The device has a varied language system and is different from the existing audio devices as it can be alternated according to the specific needs of the patient or a child with underdeveloped speech.

One can interact with the system by just tilting an eye, tilting the head in different directions, or a finger using the key-guard. The device is one of the major advancements in the field of medical science. One of the great examples of SGD was the one used by the renowned scientist Stephen Hawking.

The braille reader or the braille display is a device to assist people with vision impairment. The output produced by the computer is converted into the braille, consisting of small round raised dots on a flat surface, which can be read by the user with the touch of hands.

This completes our article on – “output devices of computer”. I hope you liked it. Do let us know in the comments in case of any questions or suggestions.