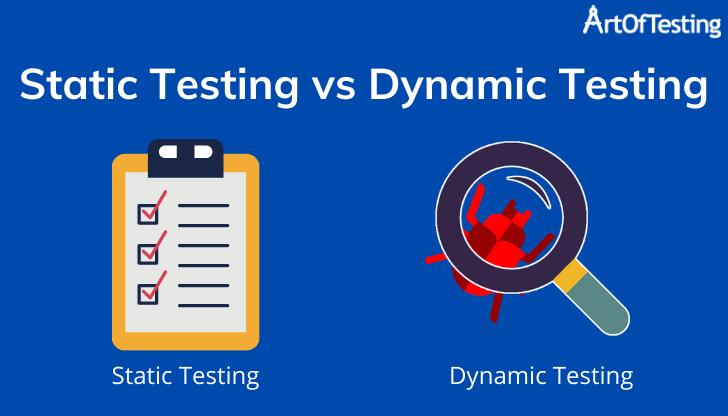 Testing is one of the most important phases in a software development life cycle. There are different testing techniques to effectively carry out the testing process. Each of those techniques can be classified as Static Testing and Dynamic Testing.

In this tutorial, we are going to learn about Static and dynamic testing and also check the difference between the two. So, let’s begin.

We are well aware of the testing in the V model. The 2V’s of it stands for Verification and Validation. Static testing is the verification while dynamic testing is part of the validation process. Let us learn about both the processes one by one.

There are 2 methods to approach static testing.

The review meeting or in other words manual examinations is finding potential defects in the system. These meetings are attended by all the team members to know about the progress of the project.

The reviews are further divided into-

This is the other method or approach to perform static testing. In this, the codes are assessed written by the developers to maintain the quality. The static analysis is performed with assistance with some tools. For example, CheckStyle, SourceMeter and, Soot.

Use of Static Analysis

But why static testing? Why is it important to test bugs in the early stages of SDLC?

Dynamic Testing is executing codes with different variables for physical examination of the system. In this way, the dynamic behavior of the code is tested. The code is compiled and run in the run time environment to identify bugs or defects. This execution of the code is done keeping parameters like CPU usage, response time, and performance of the software in mind. Therefore, it is just the opposite of static testing.

The dynamic testing of any component or system is approached in 2 different ways.

White Box Testing – The white box testing is done keeping transparency between the tester and the system. This means the tester is aware of all the internal working and the codes. The code is tested line by line.

The white box testing is done by the developers as they are completely aware of the built and insides of the system.

The white box testing has one more aspect in it – Data flow/ control testing. Data flow testing as discussed once above is to verify the program’s test paths.

Once the white box testing is completed the system is sent to the testing team for Black Box Testing.

Black Box Testing – This is performed by the testers or the testing team who are unaware of the built and codes of the system. The goal is to only verify the functionality of the system against any input. They check whether the system is producing the expected output or not. Programming knowledge is not required for black-box testing. The tester should only be aware of product specifications and requirements.

The Black Box testing is further divided into-

Functional Testing –  The focus of functional testing is on the verification of specifications of the system. The functionality of the components individually and together as a system is tested. Inputs are given to verify expected outputs. Functional testing includes- Unit Testing, Integration Testing, System Testing, and User Acceptance Testing.

Difference between Static and Dynamic Testing

Now that we have studied both types of testing techniques, let us differentiate them based on different parameters. This will make our understanding of these techniques clearer.

This tutorial is shared by ArtOfTesting author – Kanika Rawat. She is a technology evangelist and loves to write on software development and software testing-related topics.

2 thoughts on “Static and Dynamic Testing”