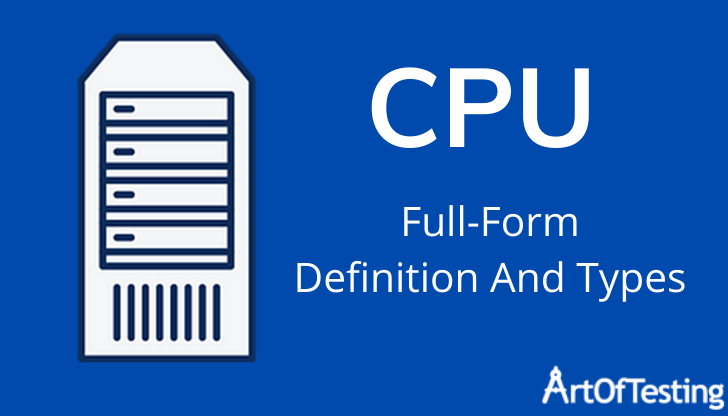 Have you ever wondered why do the laptops have  i3, i5, i7, etc. mentioned on them?

“i” stands for brand Intel. It is Intel’s microprocessor that is installed inside the laptop and the numbers simply represent a generation. The higher the number the better is the laptop. In the 3rd generation, the CPU was purely dual-core while, the i5 and i7 are quad cores. The generation simply means the speed of doing tasks is higher.

In this article, we will understand what CPU is and everything about it in detail.

The full form of CPU is-

The CPU is an integral part of the computer. It can be referred to as commander in chief for all the tasks performed by the computer thus, the name CPU or Central Processing Unit.

Just as the brain is responsible for all voluntary actions of a human body the CPU is the brain behind all tasks of the computer. It receives input, processes it, and gives output to the required unit.

The CPU consists of 2 parts – ALU and CU. Under these two parts are different components responsible for the intricate working of the CPU.

The ALU or the Arithmetic Logic Unit is responsible for all the logical operations to be conducted on the inputs. The CPU fetches instructions from the primary memory-RAM and operates the instruction till it is complete. It then sends back the output to the memory or the output unit. The ALU is further divided into Combinational logic unit and Registers.

The combinational logic unit is responsible for conducting operations as per the requirement. These operations include addition, subtraction, multiplication, and division. In addition, it performs logic operations like AND, OR, NOR, etc. as well.

Modern computers now have more than one ALUs inside them for faster execution of programs.

The CU or the control unit is the handler of all the tasks being performed. The Control unit makes sure there is no deadlock due to the running of multiple tasks. It also guides the ALU and other components of the computer on how to perform and react to the tasks given.

This control is achieved by releasing control and time signals. The control unit is also responsible for fetching instructions from the memory. It decodes these instructions and sends them to ALU for further execution. It handles the whole working and scheduling tasks for the CPU.

Now that we have studied what CPU constitutes, let us dive deeper into the working of the CPU.

A CPU is a multitasking unit of the computer. It is not assigned with one or two but multiple tasks at once. And it performs these tasks methodically and meticulously. A computer cannot work without its CPU. Here is how a CPU usually works-

1. The input or the instruction is taken from either an input device or the memory(primary).

2. The instruction is decoded and converted into control signals.

3. These control signals control different parts of the computer to execute the task.

4. The completed task reaches back to the CPU.

5. The CPU decides whether to send it to the output unit or back to the memory for storage.

These steps are also sometimes reduced to three steps – Fetch, Decode, and Execute.

The steps might seem simple right now however, there is very complex circuitry established inside the CPU. There is more than 1 task being executed at a single time. This is how you can access chrome, MS office, listen to music, and other tasks at the same time.

Let us how CPUs evolved over the years.

This CPU was introduced in the 1950s – 1960s and was the first step towards light-weighted and less complex circuitry. They evolved from the vacuum tubes and relays usage, which was quite heavy.

These CPUs as the name suggests contained transistors. This made them advantageous because, transistors have low switching time, lower power consumption, and higher speed. These could be integrated on PCBs and thus made components less complex and heavy.

Integration of a large number of transistors onto a small space is small-scale integration. A couple of transistors were integrated on a single chip, and several thousand chips were put together to construct one CPU. This method was yet a lot more effective than putting discrete transistors.

Embedding thousands of transistors onto a single chip lead to the development of Large scale integration. This led to an increase in the number of transistors and fewer ICs individually being put into the CPU. Therefore, less power consumption and compact space requirement. These CPUs were introduced in the mid-1970s and were highly successful.

Multiple numbers of ICs came down to just one IC – microprocessor. The first successful commercial microprocessor was Intel-4004. This increased switching speed, decreased CPU size, and less complexity. Since then multiple microprocessors are available in the market with different specifications like speed.

Over the years the CPUs have evolved to a great extent and will be continuing to do so. However, their core task has always remained the same. There are now desktops with pre-installed CPUs inside them. The big heavy boxes are getting replaced with just a small chip. In short, this is just the start of this era of technology.