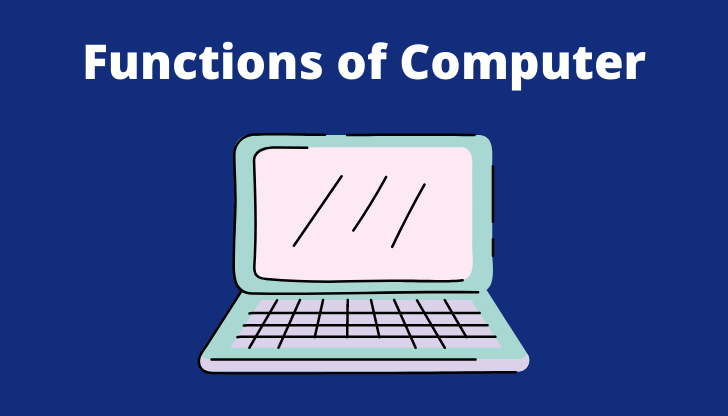 Nowadays, computers are coming in various shapes and sizes and mostly fit everyone’s budgets. According to the definition of a computer–

Computers are general-purpose machines that take input from users, process these inputs, and then give the desired output. Also, the information processed is stored in a storage.

With the advancement of technology, computers are becoming more and more advanced. Thus, with this advancement, it’s difficult to classify the functions of computers.

However, with the help of this article, we will try to understand the basic functions of computers that are performed by every computer irrespective of their shape and size.

How a computer completes a given set of desired instructions is called the function of a computer. Initially, when the user provides input to the computer from the input device the input data is stored in the primary memory then later the data is moved to the CPU(Central Processing Unit). When the data is at CPU it does the following tasks-

Based on the fundamental working of a computer system, a computer mainly has four basic functions that are-

As we know that computer is a data processing machine that doesn’t work until a set of information is given to the computer system via input devices. Any device that can be used by a user to instruct the computer is known as the input device. i.e. Keyboard, Mouse, Joystick, etc.

The input devices are responsible for getting data from the outside world and are in charge of processing this data for further execution. Data can be entered manually, automatically, or both.

In the case of manual data, it is generally fed through the mouse, keyboard, joystick, etc.

In addition to this, the automated data is fed via a script, with the help of robots, etc. and it can even be predefined to execute at the boot-up, or according to the user-based activity.

Along with the primary input devices, other devices extract the data in various forms such as text audio-video, and images. For example, Webcams can be used to feed data in video or image form, microphones can be used to send data in the form of audio, etc.

Data processing is the core function of a computer system. To process this raw data the computer uses its CPU(Central Processing Unit) which is also known as the brain of the computer as it controls all the functions. i.e run scripts, control user commands, and many more.

With the advancement of technology, modern-day computer systems use the CPU in conjunction with the GPU(Graphical Processing Unit) making it known as APU(Accelerated Processing Unit).

This merger enhances the functionality and capabilities of computers in various ways.

The Central Processing Unit consists of three main components that are:-

When the raw data supplied by the users is processed in the computer processor then its sent to the output devices by the CPU. The primary input device of a computer system that is set by default is Monitor.

The output received from the computer system can be stored in the form of soft copy and hard copy. Soft copy refers to the storing of processed data in the computer storage or other peripherals such as pen drives, hard disks which can be accessed later on the go.

Whereas hard copy refers to the output taken on cloth or paper with the help of the printing devices i.e. printer. Various other output devices are-

Storing data and information is the major function of a computer. A computer stores data in the temporary memory which is known as RAM (Random Access Memory) whereas the information can be stored permanently both internally as well as externally. The data stored in a temporary memory can be erased during a sudden shutdown.

As the data fed via the user is stored in temporary memory it is stored there until the processing of data is completed, as it is converted to meaningful information then it is transferred to permanent storage from the temporary memory.

Various storage devices are used on a computer. Although, RAM, ROM, SSD/HDD plays a major role in the functioning of a computer system.

Cloud Storage can also be used for storing data and information there are various examples. i.e Google Drive, MEGA, etc.

With the advancement in technologies, computer functions are not limited. With this article, we have tried to cover the basic functions of a computer. The functionality of any computer mainly includes the following tasks; taking input data, processing the data, returning the results, and storing the data. Thanks for reading.