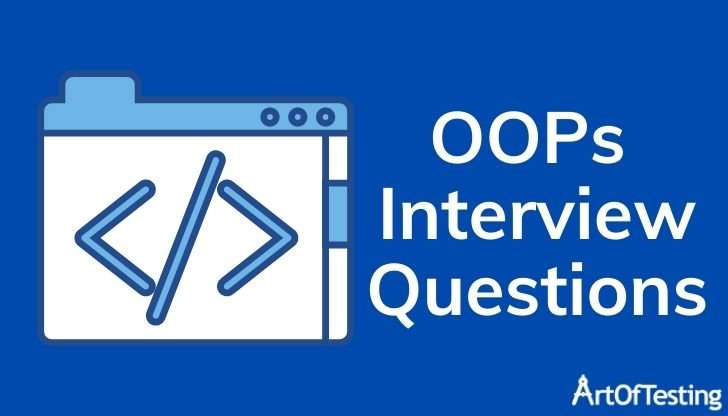 Ques.1. What is OOPs?
Ans. OOPs is abbreviated as Object-Oriented Programming Systems. It’s a computer programming paradigm that is based on objects and classes rather than functions and stored procedures. Object is an instance of a class consisting of properties that makes data useful whereas classes are a representation of an object describing its details and used to organize the data.

Ques.2. Why do we need OOPs?
Ans. There are various reasons for defining the need for OOPs, but the important ones are:-

Ques.4. What are the features of OOPs?
Ans. The OOPs comprises of four main features that are:

Ques.7. What is a class?
Ans. A class is considered as a blueprint or template using which we can create as many objects as we like. It’s a user-defined function and determines what an object will contain and how it will behave.

For example, A programmer can make three instances of a dog, Pug, Beagle, and Indie. A class will store similar information that is unique to each dog.

Ques.8  What is a superclass?
Ans. A superclass exhibits hierarchical relationships with its sub-classes. The superclass acts as a parent or base class and lets the other child classes inherit from it.

A new class created by extending this class

Ques.11. What is an object?
Ans. An object is an instance of a class and is a real-world entity consisting of behavior, attribute, and properties used to define it. Having characteristic behavior objects consumes space.

Ques.12. What is a constructor?
Ans. Constructors are used to initialize the objects. The constructors look like a method but it differs from it in the following ways:-

Here, we are calling the default constructor of MyCollege to create a new object.

Ques.13. What is a Destructor?
Ans. In contrast to the constructor, Destructors are also a special method and called automatically whenever an object is destroyed. A destructor has a special name, the same as a class with a tilde sign(~) as a prefix.

For example, the destructor for class String is declared as ~String.

Ques.15. What is coupling in OOPs?
Ans. When an object dependent on any other object is used, it is termed as coupling. It defines how closely two objects are related to each other. There are two types of coupling

Ques.16. What is Inheritance?
Ans. The term Inheritance means the transfer of some quality or behavior from parents to offspring/childs. In OOPs, Inheritance is a process to define a new class based on the structure and behavior defined in some other class. Inheritance increases the reusability of code thus making its implementation simpler.

Ques.17. What are the different types of Inheritance?
Ans. The various types of inheritances are:-

Ques.19. What is Polymorphism?
Ans. As the word suggests poly means ‘many’ and morph means ‘form’. On the whole, it means ‘one function, multiple forms’. It is one of the most used concepts in OOPs language and is applied to functions or methods. It implements the concept of overriding, virtual function, and overloading.

Ques.20. What are the types of polymorphism? Define them.
Ans. There are two different types of Polymorphism

Static Polymorphism occurs at the compile-time and is achieved through method overloading. i.e. Compiler decides what value has to be taken by the body in the picture. There are certain conditions for static polymorphism.

Due to different parameters, each method has a different signature.

For example, In the below example the first method takes two parameters and the second method takes three parameters. The compiler looks at the method signature and decides which method to invoke at compile time.

Output of the Program:-

Run time Polymorphism as the name suggests occurs at run time. Method overriding is an example of dynamic polymorphism. There are certain conditions for static polymorphism.

Below is an example to make it a bit clear

Ques.23. What are the different levels of data abstraction?
Ans. Data Abstraction has three levels

Let’s say we are storing employee information. i.e emp_id, emp_name, emp_salary etc. At the physical level, these records are defined as a block of storage in memory and are hidden from the programmers. The programmers mostly work at the logical level as the data stored above is represented here as fields and attributes and the logical relationship between the data is visible easily. And at the view level employees are allowed to interact with the help of GUI to enter the various details making them unaware of how these details will be stored.

Ques.26. What are access specifiers? <C/C++>
Ans. Access Specifiers are the special type of reserved keywords used to determine the entities like class, variable, method, and constructor. It is also known as Access Modifiers and helps in the encapsulation process. Access modifiers can be of public, private, and protected types.

Ques.29. What are Tokens? <C/C++>
Ans. Tokens are known as the building block of a program. Tokens are recognized by the compiler and can’t be split into components. Keywords, identifiers, and literals are an example of tokens.

Ques.30. What is an exception?
Ans. An exception is an event that disrupts the normal flow of a program. Exceptions help us in detecting and reacting to unexpected events. The reason for the exception is mainly when the user wants something that is not identified in the program.

//file.txt does not exist at the location

FileNotFoundException – This is raised when we try to create a new object with a file that doesn’t exist.

IO Exception – It is raised when we try to read() and close() this unknown file.

Unchecked Exception – Unchecked exceptions are also known as run time exceptions as these errors are checked during the run time. The compiler is not responsible for checking these errors. For example, logical errors.

Exception in thread “main” java.lang.ArrayIndexOutOfBoundsException: Index 5 out of bounds for length 4

NumberFormException– This exception arises when we try to put a string to Integer.parseInt().

ArithmeticException– Occurs when an incorrect arithmetic operation is performed.

Ques.32. What are the different keywords used in exceptions?
Ans. Below are the keywords that are used to handle these exceptions are

Ques.36. What is meant by Garbage Collection?
Ans. Garbage collection is used to handle the free memory by destroying the unused object and reclaiming the memory. In Java, garbage collection happens automatically till the lifeline of a program.

Ques.37. Do classes consume memory space?
Ans. No, the class does not consume any memory space, it is saved on our hard drive. When we create an object of the class memory allocation takes place.

Ques.38. What do you understand by cohesion? <JAVA>
Ans. Cohesion refers to the degree to which a class is defined to do a specialized specific task instead of multiple tasks. There are two types of cohesion

Ques.40.  What is the difference between static and dynamic binding? <JAVA>
Ans. Binding refers to the link created between a method call and method binding.

The difference between static and dynamic binding is

Ques.41. What is ‘this’ pointer? <C++>
Ans. This pointer holds the address of the current object. This keyword is used as a differentiator between the current and global objects.

Ques.44. What is the difference between structure and class?
Ans.

Ques.46. What is Enum in JAVA?
Ans. “Enum” is a short form of “Enumerators”. Enum is a class that represents a group of constants(unchangeable variables). It is declared with the word using Enum and helps in bridging the gap between numbers and objects.

There are two types of delegates