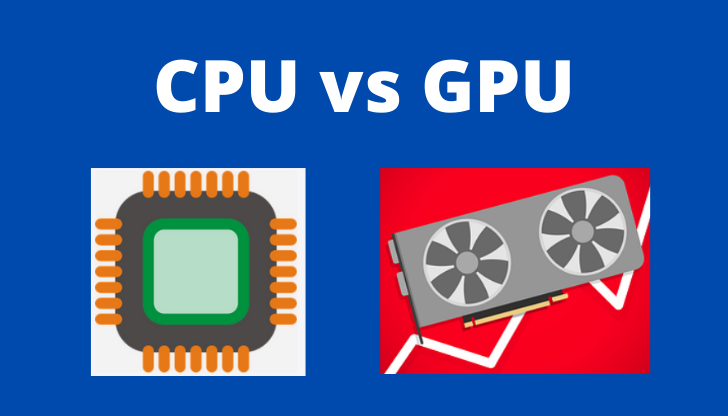 Hey guys! in this article, we are going to study the topic – CPU vs GPU and see which one is better. So, let’s get started.

You must have heard about the CPU a lot of times, about how it is the main functioning body of the computer. The CPU is an integral part of the computer. It can be referred to as commander in chief for all the tasks performed by the computer.

Similar to this are GPUs. You might notice that some games can run smoothly on some devices while not as much on others.

This difference comes from the absence and type of GPUs. Let us dive deeper and understand the differences between CPU and GPU.

The CPU is the brain of the computer. The CPU follows the steps, fetch-decode-execute repeatedly to process multiple tasks assigned to the computer. It comprises two blocks- ALU and CU. The ALU (arithmetic logic operations) handles all the calculation and logic-based tasks of the CPU.

While the CU(Control Unit) is responsible for controlling the processes and scheduling them. The control unit releases control signals that help in performing tasks sequentially.

The CPU not only handles the assigned tasks but communicates with other units like the output unit, an input unit, memory unit, etc. of the computer as well.

Now the basic architecture of the CPU consists of several cores(ALUs), control unit, DRAM, and Cache.

The GPU or the graphics processing unit is specially designed to tackle parallel processing in high graphic games and for video rendering. Unlike its close cousin-CPU, the GPU has is built only for enhancing the image and video quality of games.

It has got nothing to do with interaction with other units of the computer. The GPUs also come in two different types- integrated and discrete. The integrated GPU comes embedded in the device alongside the CPU.

While the discrete GPU is integrated on a distinct chip, mounted on its circuit board, and is attached to the PCI express slot.

Now that we know what do the terms CPU and GPU mean let’s have a look at how they are different from each other.

Difference between CPU and GPU

If seen individually both have their own limitations. A CPU has heavy-weight instruction sets, slow switch latency, and defy Moore’s law. While GPU has less powerful cores, can focus on only one task at a time, has limited APIs.

This all proves that depending on the needs we decide the requirement of CPU vs GPU. Neither one is better than the other, both hold equal importance.