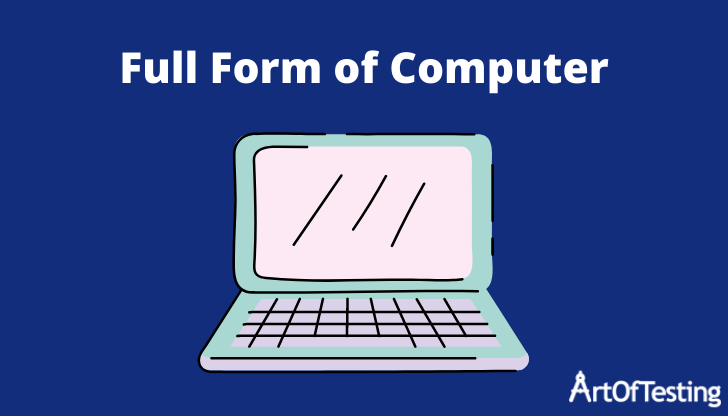 Often people mistake the word computer for an acronym and think that there is a full form of computer. However, it is so not true. The word computer existed even long before computer machines even came into existence.

The word computer was first used to define a person who performs calculations. It denotes a human-computer that could do computations or calculations. Another speculation is that it derives from the word ‘compute’ which means to calculate.

The computer was first used to perform arithmetical calculations and thus the name. It is also said that computer stands for-

However, this is just a myth, and there is no such full form of computer.

Why is computer a computing machine?

The brain or the commander in chief of the computer is its CPU.

As the name suggests, ALU performs all the calculations like addition, subtraction, multiplication, and division. It also performs logical operations like AND and OR. Earlier computers were only used to perform calculations faster and thus were called computing machines. But now computers are not limited to just arithmetical and logical operations. They are now helpful for varied purposes, which we will discuss later in this article.

Components of the Computer

The 5 main components of computer are–

The receiving of instructions from the user and converting them into machine-readable form is the task of the input unit. Input devices like a keyboard, mouse, joystick, etc. are all the peripherals that come under the input unit.

The processing of the instructions, performing logical and arithmetical operations on them, and deciding whether to store the output or send it to the Output Unit. CPU performs these functions.

The RAM or Random Access Memory is the temporary memory of the computer. It is also called volatile memory. The RAM stores the temporary data which is appropriate for current operations. Thus should be quickly accessible. RAM is temporary or volatile memory because once the mains is off all the data gets erased.

The ROM or Read Only Memory or the permanent memory stores the data for long period. It is useful for read-only purposes. Even power failure cannot cause data loss.

The storage retains all the digital data given to the computer. All the computers or even the laptops have some kind of storage inside them. These could be Hard disks or SSDs (Solid State Drives).

SSDs and HDDs store not only files and information on the computer but are also responsible for the performance of the computer. Meanwhile, SSDs are now taking over Hard Disks for the faster running of tasks assigned and applications.

The Output Unit converts the output processed by the computer back into human-readable form. Peripherals like printers, monitors, speakers, etc. all come under the output unit.

Uses of the Computer

The computer is not just a computing machine anymore. various sectors of industries are using computers for various purposes. Some of the common uses of computers are-

In conclusion, we can say that there is no full form of computer. We also found that although computers were first developed for just computing and calculations. But, now with advancements in technology, they are no more just mere computing devices and are enhancing human work in every possible way.