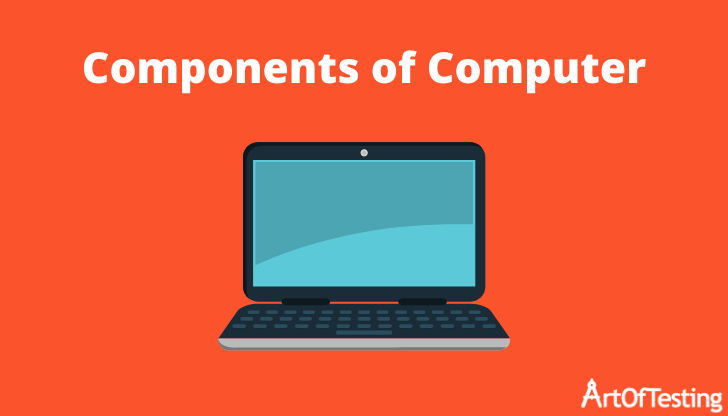 A computer is an electronic device that performs arithmetic and logical functions automatically. It helps in retrieving, storing, and manipulating data and makes work easier for the user. This is the basic definition of the computer. But have you ever wondered, how does this compact box works, what components does it constitute of making our work easier and faster? Let us look at the main components of the computer that make it truly functional.

A monitor is one of the output devices of the computer. The monitor is like a digital screen that reflects the output or results. The images or text displayed on the monitor are with the help of a video card inside it. Earlier the monitors used to have CRT inside for display but now new LED and LCD based monitors are available which have better display quality and take a lot less space.

A keyboard is an input device consisting of mechanical buttons called the ‘keys’. Below these keys, hidden from the user is an electrical circuit. Each time a key is pressed the circuit is complete. The CPU receives an electric signal. Further, it detects the key pressed and shows the output on the display.

The computer has one more peripheral-mouse. It is part of the input unit. The mouse has two purposes-
1. To direct the pointer present on the display of the monitor.
2. It selects and moves files

In addition, right-click in the mouse displays a drop-down menu. There are two types of mouse, mechanical and optical. The mechanical mouse is not much prevalent nowadays. Previously, they used to consist of a mechanical trackball beneath them to track the pointer.

The optical mouse is much more advanced and uses LED light to assist the direction of the pointer. Two buttons are not the limit in the mouse now. There is a new mouse in the market called the gaming mouse. It has one too many buttons solely made for gaming. As a result, there has been a hike in demand for such mouse.

A printer is an output device, helpful in representing the output on a sheet. Whatever is displayed on the monitor’s screen can be printed through a printer. It contains a barrel filled with colors that imprint the data on the paper. With the technology growing there are now various print technologies. The better the speed, quality, permanence of the print, the higher the price.

Different sounds produced by the computer can be heard through the speakers. Speakers can be used to listen to songs or any kind of audio coming out of the computer.

Speakers are the intermediate device between the computer and the user. They have a transducer that converts the electromagnetic waves of the computer into sound waves. The speakers always come in pairs to create a stereo sound. Cables connect Computers to speakers. Another good option is using headphones. These are also output devices and perform the same work but are portable and can be used without creating a disturbance.

The scanner is used to scan documents, pictures, or texts and feed as it is to the computer. It is an input device, that works similarly to a photocopy machine does. It consists of a flat-bed over which the document is placed, and under it, series of lights are swept across. Therefore, it helps in scanning the document and producing its soft copy on the computer.

Just as the speakers are used to listen to audio, the microphones are used to feed audio in the computer. The working remains the same, but the computer understands when the sound wave is converted into an electromagnetic wave.

Being one of the main components of computer, it controls the processes taking place inside the computer, manages I/O operations, and does all the logical and arithmetic operations. The CPU constitutes 2 major parts ALU(Arithmetic Logical Unit and CU(Control Unit).

The memory unit of the computer stores all the data, information, and instruction to be processed. The memory gives fast access to the data. Therefore, more the memory faster would be the thinking ability of the computer.

There are two types of memories, Primary and Secondary

The Primary memory consists of RAM(Random access memory). The RAM is used used to store the recent data. This is used for faster access to recent files or instructions. The primary memory is volatile, which means it gets erased once the power is switched off. The Secondary memory is the permanent memory. It stores data for a longer period for future use purposes. The Secondary memory includes a hard disk. It is non-volatile, which means the data does not get erased even in a power failure.

The main function of the computer is to store and manipulate data. This makes it clear that a computer constitutes a large storage space. This storage space can be of two types

The HDD or hard disk drive is a moving disk that stores data in the computer and is a non-volatile type of memory. This means the data is not erased even in a power failure. The hard disk contains moving platters and a magnetic arm to read and write data on the platters. The whole arrangement is in an airtight case.

The SSD or solid-state drive is an immovable type of storage space and uses flash memory to store data. This is also the secondary memory in the computer and is non-volatile. The SSDs are now replacing HDDs because

However, SSDs are much more expensive than HDDs, therefore, are less preferable when it comes to cost-cutting.

The motherboard is the main circuit board inside the computer. It helps all the components of the computer communicate with each other. Such as between the CPU and the storage unit, or the CPU and the output devices. The motherboard consists of a microprocessor chip, which does the job of interfacing peripheral devices, CPU, and other peripheral buses.

GPU stands for Graphics Processing Unit. It can process thousands of threads simultaneously. This makes the GPU ideal for purposes like high definition image processing, gaming, or any task that involves graphics.
A GPU can handle multiple tasks parallel, and that is how it is helpful in image processing because it can handle contrast, shape, lighting, etc. together and can display it on the screen altogether really fast. CPU die, motherboard, or video card are embedded with GPU.

This completes our article on – “components of computer”. I hope you liked it. Do let us know in the comments in case of any questions or suggestions.