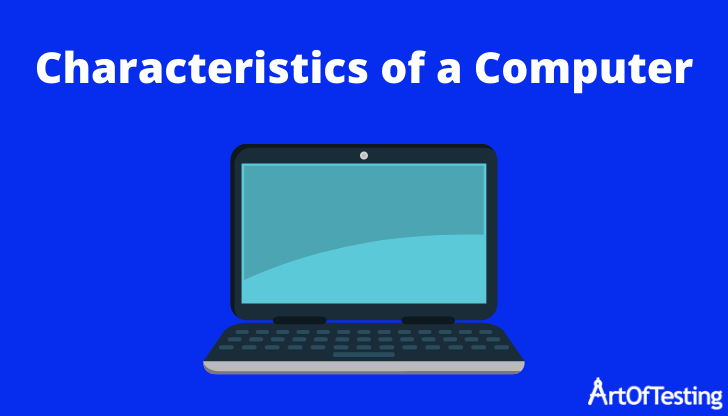 With the advancement in technology, computers are now part of our day to day chores. This makes it very important that we understand how they are being helpful to us. Below are some of the many characteristics of computer that make them truly reliable and a great help to humans.

Most of the advantages of the computer come from its speed. A computer is capable of solving a complex problem 10 times faster than a human mind. A computer can handle about 1,000,000 instructions per second. The tasks are performed within microseconds and nanoseconds. This speed helps in completing time-bound tasks and delivering the output without any delay. This speed has helped humans to a great extent.

With speed comes the responsibility of accurate results. The computer is capable of giving almost 100% accurate results. Be it any complex calculation, a computer delivers it with zero errors. If any error is found, it’s mostly due to inaccurate or insufficient data provided by the user. A computer can work consistently alongside maintaining speed and no compromise in accuracy.

Being consistent is one of the best characteristics of the computer. A computer can work day and night, seven days a week without getting tired and most importantly without any error. You can feed it with the same data multiple times, and each time result will be the same. No human can work day and night leave alone giving accurate results. A computer can work on trillions of instruction continuously and this is why it helps complete tasks within time.

Versatility means ‘ability to adapt or be adapted to many different functions or activities.’  A computer is a versatile machine that is, it can perform multiple tasks and not just complex calculations. Computers these days are used in banks, offices, schools, shopping complexes, grocery stores, etc., and at each place, they are used for performing different tasks. This shows that computers are versatile and can perform various tasks with the same efficiency and accuracy.

We know that computers are versatile, however, they can not only perform various tasks but also at the same time. Computers are multitaskers, they can work on different tasks at the same time, that too without slowing down or inaccuracy. For example, you can play YouTube in the background while downloading a movie from some other website and simultaneously playing a game. And all the applications will perfectly fine without any hassle. This can be easily and efficiently done by a computer. Thus computers are multitaskers and help complete various tasks simultaneously thus saving a huge amount of time.

A human mind tends to forget things easily over some time, even information printed on paper gets faded away if kept for long. But data fed into the computer neither fades nor gets lost. Any information can be randomly accessed and that too with ease. Whatever data is fed into the computer stays the same way for years and is only up to the user, when to access it modify it, or delete it. This makes a computer highly useful in terms of storing sensitive and important information.

The computer might be able to perform lengthy complex problems on its own and that too with zero errors. However, a computer does not have a mind of its own. It only works when a user feeds it with a piece of information or some instructions. This proves that it cannot work on its own without a human command. The computer is incapable of making decisions on its own. Thus it is completely dependent on the user to get instruction, otherwise, it is a small mechanical box that is of no use unless a user is linked to it.

Despite getting instructions from a user, a computer is still called an automated machine. This is because once the instructions are passed, the computer works on its own till the task is completely done without any human intervention. Not only this, but a computer can also be programmed to perform tasks on a fixed schedule. It can be used to set daily reminders, scan for viruses timely, perform software updates on its own, or perform system diagnostics. All of this can be done without a user to remind the computer daily. A computer is also used in large factories to pack and ship products, which can be all done with the help of a computer once it is fed with specific instructions.

Computers are capable of storing a large amount of data due to their huge storage capacity. Be it any kind of data-games, music, movies, pictures, text documents, etc. a computer can store it all. Computers nowadays come with various storage capacities up to 1TB. The storage is not limited to this. One can have external storage devices like CDs, pen drives, external hard drives, etc. to store data. There is no limit to what amount of data can be stored. And the biggest advantage is that any of this data can be accessed randomly without any hassle. Thus computers are a great way to store our data safely for the longest time.

With an increase in, the dependence of humans on computers, it has become necessary that computers are modified in a way that proves to be advantageous to us to a great extent. However, even with all these characteristics of computer, it must always be kept in mind that a computer is just a machine and use of it should be limited to the work. Excess of everything is bad, therefore computers should be used judiciously.