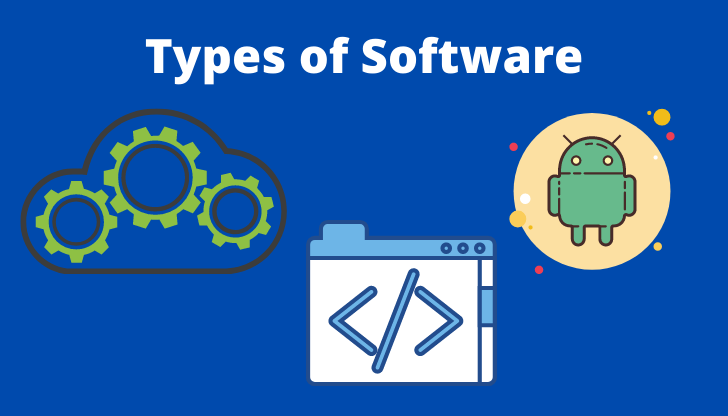 As we all know that technology plays a major role in our day-to-day life but have you ever wondered how this works?

From our smartphones to surf the web or text messages received on WhatsApp, Instagram behind all is the software that runs them.

There are different types of software helping us to perform our day-to-day tasks and thus increasing our efficiency.

This article will help you to get a better understanding of software, its types, uses, and applications.

What is a software?

Software is a set of instructions that tells a computer to perform a specific task or set of tasks.

It’s an intangible part of a device and acts as a link to the hardware which is the tangible part.

Although, we cannot touch the software but can see it through the GUI(Graphical User Interface).

Basically, the software provides a way of communication between the machine and the user.

Some common examples of the software that are used in day-to-day life and are almost familiar to everyone i.e. Google Chrome, Adobe Photoshop, Microsoft Word, Gmail, etc.

The software can be classified into various categories depending on the nature of the source code, accessibility, and the basis of applications.

The two major types of computer software are -:

System Software is a set of programs that acts as a base for other softwares. It is designed in a way that it can control and interact with the computer hardware. We use system software to control the computer itself.

System software acts as the middle layer between the end-user and the hardware connected to the system. It only runs in the background of the device at the basic level while we are using the other software. Thus we can also term it as “low-level software”.

An operating system manages the hardware of the computer and the software resources. It also provides the software services required for the execution of application software.

Examples of OS  are-

Firmware is a set of instructions embedded on the piece of hardware at the time of manufacturing. It tells the device how to operate. It is semi-permanent. That is end user cannot change it. It remains the same until and unless it’s updated by the firmware updater.

Utility software is considered as a part of system software. It is the set of tools whose main focus is to analyze and optimize the performance of computers. Basically helping the users in ease of computing or multitasking.

The several other features of the system software are-

This type of software helps us in day-to-day activities and helps us in increasing our efficiency. i.e. Sending mails, creating docs, setting alarms, etc.

Application Softwares can be classified into various categories on the basis of their use, availability, and several other parameters but we have broadly classified the application software into two types.

These types of application software are designed to serve large numbers of end-users. As they are made for almost everyone these are generally low cost.

As the term suggests this software is basically made on the end user’s requirement. Developing custom software is expensive.

Various other features of application software are-

Apart from the software explained above, the two other types of computer software are-

Programming Software is the programming tool that facilitates the programmer or software developers to create, test, debug software inclusive of applications and system software.

Examples of Programming Software are-

The Driver Software function is to administer the peripheral of devices connected to the system. These come under the subcategory of system software. The operation of communication between the devices is made by gathering information from the OS. Some of these drivers are pre-installed while others are installed whenever a new device connects to the system.

In this article, we have mostly covered the broad categories of software and its types. As in this modern era as we all are moving towards digital life you might be wondering – Do social media apps e.g. Snapchat, Instagram, FB, and more of them fall under application software?  The answer is yes – other than the major types of software there are five subcategories of software.

These software are available for free of cost on the internet, all you have to do is to install and run them. Freeware doesn’t provide the accessibility to change the source code application for further integration of other applications.

Some examples of freeware are-

These types of software are usually given to users on a trial basis for several time periods usually for 30 or 90 days known as the “trial period”. After the specific trial period, the users are expected to pay money for continuous use. It’s basically the “try before you buy”.

Some examples of shareware are-

The source code of Open Source Software is public and is easily available and free to download on the internet. In short, it is also referred to as OSS. The users can easily modify the code according to their needs or use and can even add specific features. The price of the OSS is generally very low or mostly free.

Some examples of Open Source Softwares are-

Closed Source Software is also referred to as CSS in short and is also known as proprietary software. The source code for these types of software is not made public, only the user or organization who has created the software as the access of code thus providing a layer of security. The price of this software is high and these are covered under IPR (Intellectual Property Right). For access to this software, users must purchase a license.

Some examples of Closed Source Software are-

In this article, we have learned the various categories and types of software around us. A clear understanding of this article will help you to choose and use the software properly.