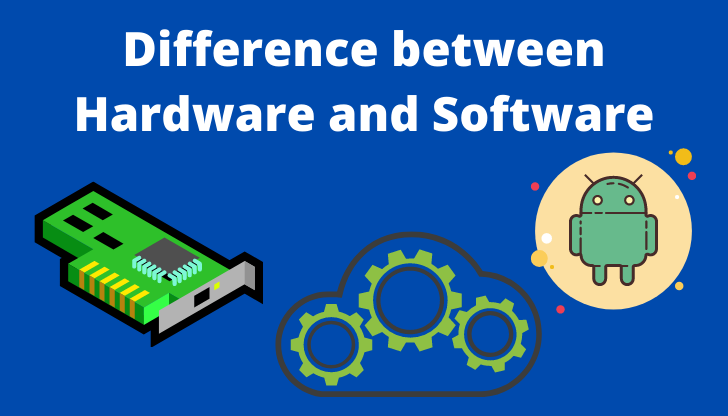 When we are asked to imagine a computer system, we generally think of a box known as a monitor, keyboard, mouse, and some electronic circuitry. But, computers are much more than this.

Moving ahead in this article we will get to know more about the difference between hardware and software.

Hardware is a physical part of the computer that can be felt, touched, and houses various other parts of a computer system. i.e. memory, processors, peripheral devices, etc. Hardware is tangible. Thus every system requires hardware to execute the desired function of software and store the information.

Hardware can be divided into 4 groups-

Input Devices – These are the electromechanical devices that are used to deliver the input taken from the user to the computer. Some examples of the input devices are Keyboard, Mouse, Joystick, etc.

Output Devices – These are another set of peripheral devices that shows the output of the data fed via input devices. Some examples of output devices are monitors, Printers, etc.

Internal Components – These are parts usually hidden under the computer unit and are the core of the computer system. Some examples consist of CPU, RAM, ROM, motherboard, etc.

Secondary Storage Devices:- These devices are used to store the data permanently. These are external devices and can be moved freely. Some examples are SSDs, Hard Disk, etc.

Software is a set of instructions that tells a computer to perform a specific task or set of tasks.

The software can be classified into various categories depending on the nature of the source code, accessibility, and the basis of applications.

The two major types of software are-

We have already covered the software and its types comprehensively in our other article  Software And Its Types. Now, let us move to our key topic which is the difference between hardware and software.

Differences between Hardware and Software

Computer Hardware and Software are inter dependable on each other. However, hardware can run without the software but vice versa is not true. That’s all about the major differences between hardware and software.

This article is written by ArtOfTesting team member – Rahul Singh. He is a tech enthusiast and an avid learner.