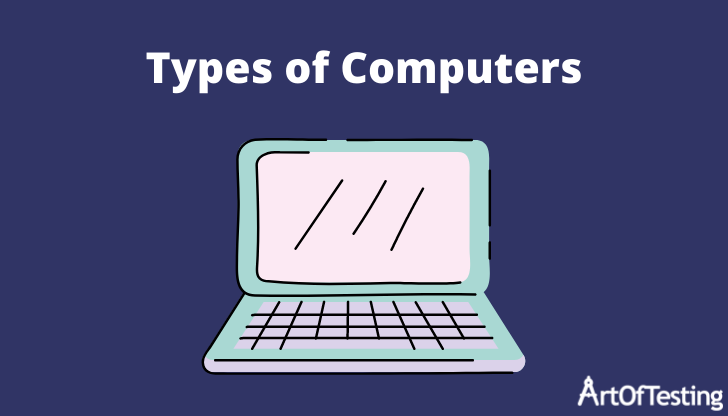 Computers have now become a part of our daily lives. Anything and everything is now completely computer-dependent. However, an increase in needs has also created an increase in the demands.

There are hundreds of different tasks that require the need for computers. But, a single type of computer performing each of these tasks is not an easy option. This is why with the advancement in technology we have come up with different types of computers. Each serving a different purpose.

In this article, let us look at some of these computers which are classified based on-

Types of Computers based on Data Type

Based on the data type handling, computers can be categorized as Digital, Analog and Hybrid.

These computers process analog data. An analog data keep varying. Hence, it does not have any discrete value. They read the continuous change in the input, process it, and then provide the output. Analog computers perform with equal diligence and accuracy. They are however slower than digital computers. They are also slightly less precise.
Analog computers are for a Speedometer, thermometer, frequency, and signal of voltage, measuring the resistance of a capacitor.

Types of Computers based on the Purpose

Microcomputers are nothing but personal computers. These are single-chip systems. These are useful for personal use and can perform all the basic functions of the computer. Microcomputers require very little space and are comparatively inexpensive. Such computers have the most minimalistic requirement in terms of I/O devices. And have all the circuitry mounted on a single PCB. For example tablets, I pads, smartwatches, laptops, desktops

Standing in between a microcomputer and a mainframe computer is the minicomputer. These computers are useful if people around 5 to 300. Those who want to operate the system at the same time. You can see such computers at the billing counters of malls or large institutions.

The mainframe computers are useful when a large number of people are involved. Like in the health care or retail sector who want to access data simultaneously. These computers process large amounts of data.

In addition, mainframe computers have evolved a lot over the years in terms of speed, size, and efficiency. These computers are just below the supercomputers. And sometimes are even more useful than a supercomputer. Examples – IBM z Series, System z9, etc.

The biggest and fastest computers are supercomputers. Such computers can process trillions of functions within a few seconds. We generally use MPIS( Million Instructions Per Second) to measure their performance. These computers are specifically designed for scientific applications such as –

Types of Computers based on the Functionality

These are hardware components or software programs that are built to assist other computers termed as clients. Together this architecture is called the client-server model. The client sends a request to the server and the server responds in return with a result or a solution. This proves that these server computers are more powerful than standard computers. The main purpose of these computers is to share data and resources with other computers.
Different types of servers are useful for different needs and applications. For example, cloud server, application server, database server, file server, etc. Each of these servers has a different purpose for different client needs.

These computers are mainly microcontroller-based systems. Used for processing specific tasks. The embedded computers have both a combination of software and hardware components. But, are usually a part of a larger system. Each of its components is designed from scratch to serve a specific purpose or complete a specific task. Another characteristic that distinguishes them from a standard PC is that all of its components are integrated on a single PCB or motherboard. They are most helpful for industrial use. this is because of their ruggedness.
Examples: GPS systems, centralized heating systems, fitness trackers, digital watches, electronic calculators, etc.

Mostly portable devices designed for specific functions come under this category. They can perform very restricted tasks for which they are built like text editors, music players, photography, videography, etc. The most common example is mobile phones. Many wearable devices are also available in the market.

To sum up, it can be said that there is everything for everyone.

1 thought on “Types of Computers”