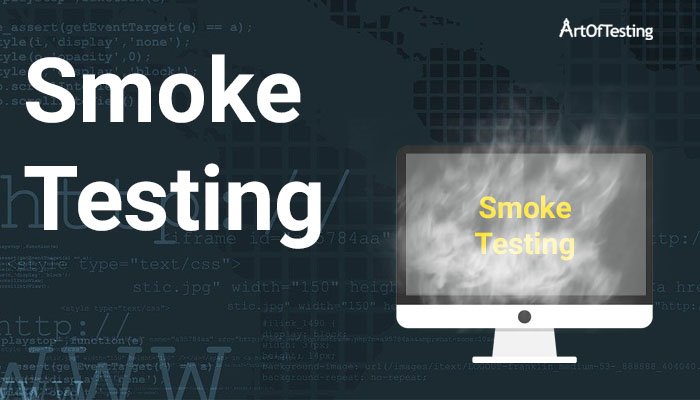 Hello friends! today we will be studying smoke testing. It is one of the most confusing terms in software testing. That is why it is also the most commonly asked question in testing interviews. In this tutorial, we will get to know about smoke testing, its features, and its advantages.

It is a type of testing in which we execute the most crucial tests to make sure that the application can be considered for further exhaustive testing or not. It is also known as build verification testing.

It is performed right after the testing team receives the build. A subset of test cases is run over the build covering the most important functionalities. The functionality covered by the smoke tests is crucial, failing which results in the rejection of the build.

This seems all good if the build is stable or has minor issues. But the real problem arises when the build is not stable and the core functionalities are not working. In this case, we wasted the testing team’s time. Also, we made the whole development team and the stakeholders wait regarding the stability of the build.

In order to handle cases like these, smoke testing was introduced. In this approach, we will not start with the execution of the complete regression testing cycle or the complete test cases. Instead, we will just ask the testing team (or only some members of the testing team) to check only the core functionalities.

In this way, if the build is stable, we can quickly switch to exhaustive testing. In case the build is not stable, the development team is quickly notified about the instability of the build.

Some smoke tests for applications like Gmail can include test cases that are very critical to the app. For example-

Why it is called ‘Smoke’ testing?

Smoke testing got its name from the testing of electrical appliances. In the past, the first thing to do while testing an electrical device was to plug it to a power outlet and see if it emits smoke or not. If there is no smoke then it means that the electrical circuits are not faulty and the device can be tested for its functionality.

The same is the case with software, we check that if the bare minimum functionality is working or not, in order to make a choice as to whether thorough testing needs to be done or not.