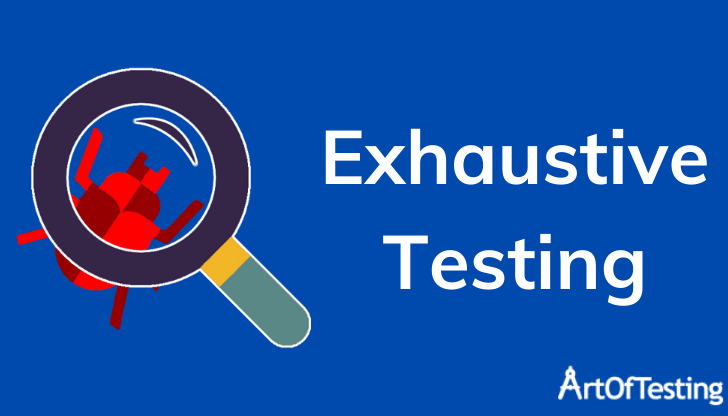 Complete testing or more commonly known as exhaustive testing is a testing approach that aims at trying all data combinations to leave no scope of further testing. In other words, it can be said that, after exhaustive testing, all testing parameters are covered.

The exhaustive testing comes under quality assurance, this means under no circumstance the application will cease to system crash or any other malfunctioning. It is also said that exhaustive testing is a myth and is just not feasible.

Even if you have tried all combinations and re-combinations of test cases, complete testing is just not possible. However, this condition is not applicable to a few trivial cases.

In this article, we are going to unravel some important characteristics of exhaustive testing and understand the process of performing it.

Despite knowing the fact that exhaustive testing is physically impractical, the testing team tries to achieve it and tries to get it as close as possible. Let us understand this through an example-

However, such cases are possible for only small projects with limited scopes. Creating an exhaustive test case database for large projects where hundreds of inputs will be involved, exhaustive testing will be time-consuming as well as next to impossible.

Such scenarios can be commonly seen during gaming launches. No matter to what extent the game application is tested, there are always at least one or two glitches noticed by the end-user. Compatibility issues, issues in graphics, movement of the character, etc. are very common.

Though, the company can not be blamed for it as they always strive to achieve complete testing.

We are listing some of the test strategies that one can use during an attempt at exhaustive testing.

Despite seeming similar both the terms have distinguishable characteristics. Let us look at them one by one.

Despite being labeled as an impractical and impossible method, testers yet strive to achieve whatever is close to exhaustive testing. The method might be time-consuming or high in cost, but it is 100% effective.

It leaves no straw for the user to pick and complain of. If the above-mentioned strategies are followed one can achieve something near to exhaustive testing.

However, for large projects mart work should always be prioritized and that is where software techniques like effective testing come into play. An experienced tester will always choose the right technique for different projects.