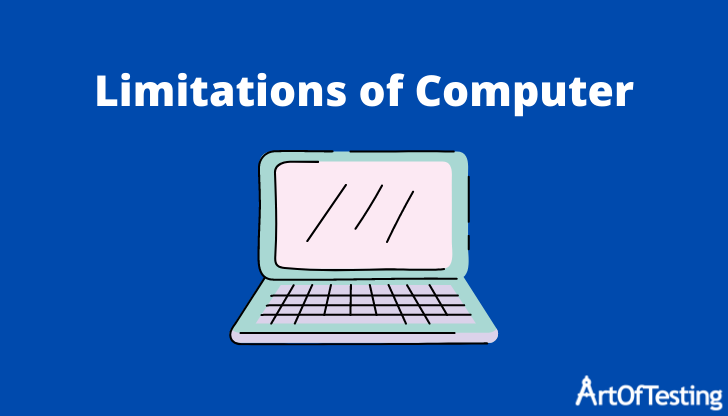 There is no sector in this world that has not advantaged from the usage of the computer. Computers are in every sector of the world. From big IT firms to even the agricultural industry. There is no place where the benefits of the computer have not been reached. And they truly have outperformed humans in terms of speed, reliability, versatility, and the capacity to store and work day and night without getting tired.

However, there are a few milestones that computers have yet to achieve. There are still some areas where humans outperform computers. Somewhere in the near future computers might overcome these limitations. But as of now, human work is still irreplaceable, so let us discuss a few such limitations of computers.

A computer cannot act on situations that are not fed or programmed into them. They have zero IQ(Intelligent Quotient). These outputs are completely dependent on the user’s input. That is they produce the wrong output if the wrong input is provided instead of correcting it.

While the computer can work tirelessly and relentlessly. However, few tasks require suggestions and ideas. This can only be done if a person feels positive, negative, or some feeling toward the task.

A computer proves unsuccessful in such scenarios as it does not have feelings/ EQ(Emotional Quotient). A computer can be used to search for any information from the web. But it cannot personally help a person in a task. This is the biggest limitation of the computer.

A computer cannot decide on its own. Each operation that the computer performs is fed with an algorithm to perform different processes for each situation. However, if it faces a problem that is not fed into the system, the computer is not ready for it. It either gets corrupt or does not respond.

For making a decision humans have knowledge, wisdom, intelligence, the power to decide, etc. Computers have none of these. They are programmed to work with logic and algorithms, not judgment.

A computer might be an automated machine still, it requires human assistance. It works only when it is provided with some input. For example, you have to do calculations for your math homework. You will have to feed each sum to get the output. The computer cannot read the whole homework and provide results.

Another example is a spell in MS Word. Computer points to spelling and grammatical errors by underlining them with red ink. But it cannot correct it by itself. It also shows errors in proper nouns like names. This is because a computer can only identify words from a standard dictionary.

A computer has huge storage and can store a hundred times more than a human brain. However, due to lack of implementation, it proves to be useless. A computer can store a book of law but cannot implement it.

It can store hundreds of guides to solve different problems. Yet, it can only solve problems of which algorithms are fed into it. This is where humans outperform computers.

A computer is a machine and is fully automated once switched on. But it cannot work to switch itself on. The computer also does not when to start and when to stop unless it is fed with such a program.

Some human assistance is always required in most situations. It cannot work completely on its own without human intervention.

As a coin has two sides, similarly, a computer has its capabilities and limitations. Computers have been useful to humans for the longest time. But they do have their limitations and can only be overcome by human assistance.

However, there has been a lot of research going on to overcome the limitations of computers. For example, there is extensive research going on artificial intelligence. There will be a time in the future when computers will possess human virtues but as of now, human work is irreplaceable.