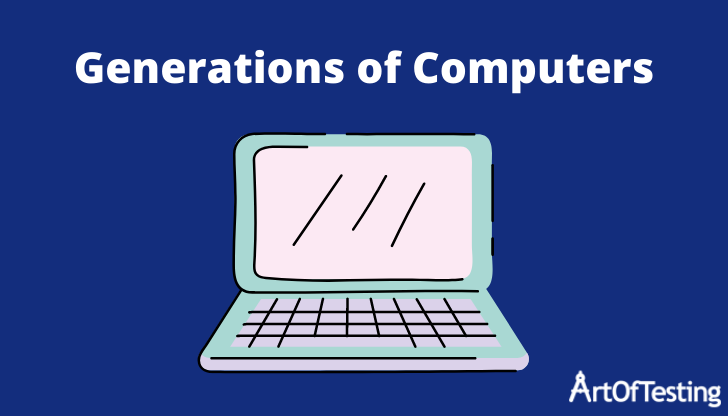 Advancement in technology started with new technology emerging every decade. Then shifted to a couple of years and now probably at the gap of every six months. The history of computers dates back to the mid-1900s. Since then computers have kept evolving. There is a total of 5 generations of computers. With each generation of computer better than the previous.

In this article, we have discussed all these 5 generations of computers in detail. So let’s dive into the article.

The circuitry involved the usage of two things mainly – vacuum tubes and magnetic drums. It used hundreds of vacuum tubes for the wiring.

This was the start of using the machine language. A language understood by the computers. The most famous computers of this era are UNIVAC and ENIAC. These computers were usually used for educational and scientific purposes.

But in the year 1951 UNIVAC was purchased by the US census bureau became the first-ever commercial computer.

Let us look at some of the advantages and disadvantages of the computers of 1st generation.

Transistors were used to manufacture the 2nd generation computers instead of vacuum tubes. The transistors were invented way earlier in the late 1940s. But came into use as an electronic component for the computer in 1956.

These computers were used for almost a decade between 1956-1963. The use of punch cards as input still existed. Subsequently, there was a switch from cryptic binary language to the assembly language. This used symbolic characters. At the same time, high-level language COBOL and FORTRAN were also being developed. Magnetic drums were replaced by magnetic-core technology.

These computers had their own set of advantages and disadvantages.

The time between 1963- 1973 is the 3rd generation of computers. The 3rd generation computers came out to be the first most commercially used computers. These computers were compact, portable, and highly efficient. Moreover, the large transistors were miniaturized. They were placed into integrated circuits. This was a big leap for the advancement of technology.

These were also the first computers to use actual keyboards and mouse. Before them, punch cards were the input devices. These interfaced with an operating system and made the computer truly functional.

As a result, several applications could run on the computer. Unlike the previous generation computers.

With so many changes new mass market of users emerged during this time.

In this generation, computers were based on microprocessors. It was a revolutionary time in the world of technologies. The whole computer processor came down to one small chip -Intel.

The first chip Intel 4004 was developed in 1971. All the components CPU, memory, I/O controls were all positioned onto this single chip. Moreover, the computer that used to occupy a whole room could now be placed on a desk.

This time is also called the era of VLSI (Very Large scale Integration). With VLSI thousand of components could be integrated on a single chip. In the year 1981 people saw the first computer for home use. It was manufactured by IBM. And in 1984 Macintosh was introduced by Apple. These microprocessors were not limited to computers they were further used for other electronic devices.

The emergence of Artificial Intelligence started in 2010. It is still under development. Some of the technologies are highly in use such as voice recognition systems. It also introduced a new fabrication level ULSI (Ultra Large Scale Integration). ULSI means the integration of million components on a single chip. Most importantly it supports all kinds of high-level languages for example Java, C++, C, etc.

The goal is to create powerful computers that can handle a huge amount of data. Subsequently can imitate human work. Other various 5th generation technologies are-

This completes our article on generations of computers. We can see that it is sometimes difficult to determine if we have reached the peak of technology. Or is there still a scope? We have robots performing sophisticated surgeries. Robotic body parts to assist disabled people. All sectors widely use AI.

Certainly, technology is doing every possible thing it can do. However, it can never replace humans. Nor it should.