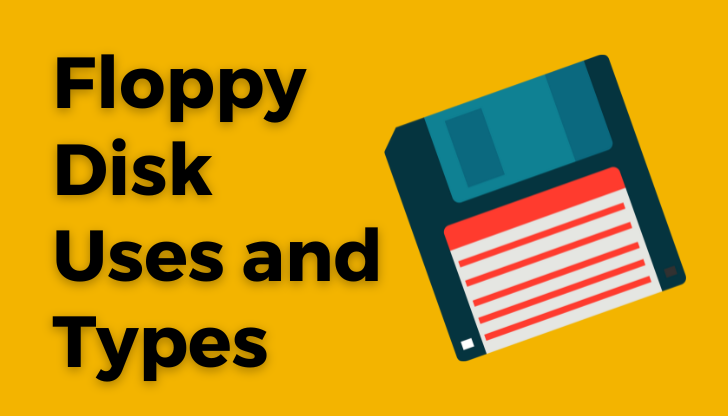 If you are one of the people interested in the history of the computer world, then you must have surely heard about floppy disks. And even if it is not so, then this article will undoubtedly be able to introduce you to the world of floppies.

What is a Floppy Disk?

A Floppy Disk is a type of magnetic disk coated with a magnetic material such as iron oxide. Also called a floppy or diskette, it was invented by Alan Shugart of IBM (International Business Machines Corporation) in the year 1967 for storage of non-volatile, permanent secondary memory, to be interpreted by a floppy disk drive (FDD). Floppy diskettes composed of flexible (hence called floppy), thin, circular magnetic disks, are majorly available in three sizes 8 inches, 5.25 inches, and 3.5 inches.

Early computers did not have CD-ROM drives or USBs, and floppy disks were the only way to install a new program on a computer or to back up your information.  If the program was small (less than 1.44 MB for a 3.5″ floppy disk), the program could be installed from a single floppy disk.

However, most programs were larger than 1.44 MB and hence required multiple floppy diskettes. For example, version 13 of Windows 95 came on a DMF diskette and one diskette had to be installed at a time.

You would be surprised to know about specialized, high-end embroidery sewing machines, which are dependent upon floppy disks for programming. Files are transferred between computers by means of a 3.5-inch floppy disk which is said to be the Universal Standard for file transfer between different computers.

One of the most important applications of 3.5-inch floppy disks was to deliver programs and services, including important drives and software updates. Floppies can be easy tools to update drivers and software.

As we told you above that in the late 1960s, the first floppy disk was introduced with a diameter of 8 inches. This floppy disk was designed only in read-only format.  But as it was upgraded over time, it became capable of reading and writing.

Have you ever wondered how the floppy disk got its name? In fact, Floppy got its name because of its physicality as its physical structure looks like a floppy folder. After which all the subsequent versions were also named taking the same name as the base.

After the invention and launch of the world’s first floppy disk in 1967, a new version of it was launched in the 1980s, whose diameter was 5.25 inches. This floppy disk drive was the most widely used drive for computers at that time. The ability to store data on this floppy disk drive ranged from 360 KB to 1.2 MB.  Some of the 5.25 versions also had floppy disks that allowed data to be written on both sides and to modify that data again. After this floppy disk was further upgraded, after which it was developed as a double-sided drive.

Soon another floppy disk came on the market, which in comparison with the earlier floppy disk drive was smaller. Its diameter was 3.5 inches. Its upper part was made of plastic and it could store up to 1.44 MB of data in it. Apart from this, data up to 730 KB could be stored on its double-density disk.

Read/Write Heads: are placed on both sides of a floppy diskette, they move together on a common congregation. The two heads are not positioned directly opposite to each other. Reading and writing are done on the same head while a second, wider head is used for erasing an input just prior to it being written.

Drive Motor: A very small spindle motor is attached to the metal hub at the center of the diskette, spinning on an average of 360 rotations per minute (RPM).

Stepper Motor: This motor makes accurate revolutions to move the head assembly to the proper track location. The input writing head assembly is further fastened to the stepper motor shaft.

Floppy disks prove to be more appropriate for short-term data storage and data transfer. They are susceptible to malfunctions and can hold only a small amount of data in comparison to newer storage devices, such as USB devices and CDs.

The above article provides decent information about floppies which can prove to be useful for anyone who desires to acquire knowledge about the same.