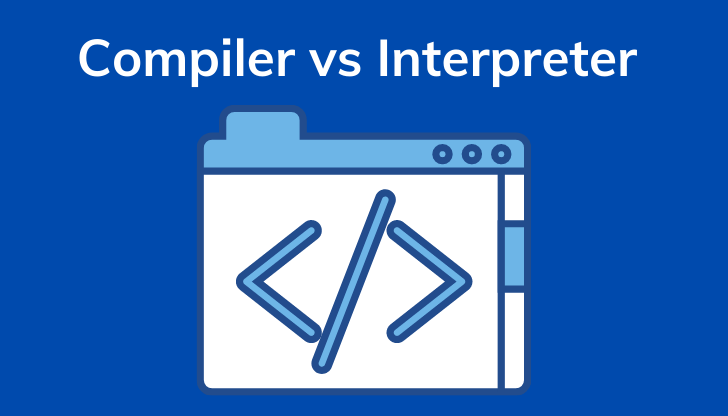 Here is when the concept of interpreters and compiler come in. These programs are built in such a way that the high-level language understood by humans is converted into a low-level or machine code. This simplifies the work of humans as they do not have to waste time on understanding another language that is anyway way too hard to interpret.

In this article, we will study the working and characteristics of an interpreter and compiler. In the end, we will differentiate them based on their features.

So, let us begin!

The software or a program built to convert any high-level language line-by-line into machine code or the language understood by the computer is called the interpreter.

Interpreters act as a medium between other programs and the computer, it helps them to run on the computer or any other server. However, during the run time the code is checked line by line. And the process does not proceed if any error is found, till corrected.

This is a very effective method of finding errors, as errors can be matched to their respective lines, however, it is a very lengthy and tiresome method. But, on the same hand, the interpreter helps the programmer to rectify its mistakes before moving onto the next step.

The interpreter converts the HLL(high-level language) or the source code into some intermediate language before finally converting it into the machine code. They are usually built for microcomputers.

Advantage and Disadvantage of Interpreter

The advantage is that they execute line by line thus helping coders to identify the errors.

The disadvantage is that they take a large amount of time to execute as compared to the compiler.

The working of the compiler is the same as the interpreter, however, just the working is a bit different. The interpreter focuses on each line of the source code, the compiler translates the complete code into the machine language. This is also the reason, compilers are faster than interpreters.

There are various kinds of compilers that produce outputs according to the needs. Let us look at some of them.

Working and Structure of Compiler

The compiler may have many parts, but they can be classified under three primary parts- front end, middle end, and back end.

Advantages and disadvantages of Compiler

Difference between compiler and interpreter

Hopefully, by now you must have understood the working and different characteristics of the compiler and interpreter both. Here are a few of the many differences between both programs. Let us look at them one by one.

Each of these software has its own advantages and disadvantages, therefore, it is quite tough to decide which precedents which one. So depending on the OS, CPU, and the language being used, compiler and interpreter are chosen.