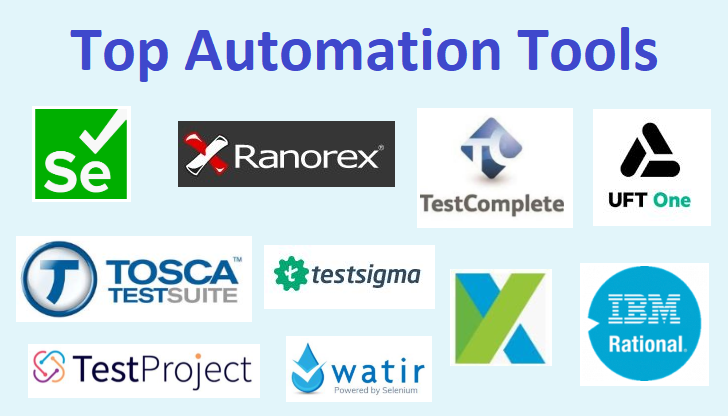 In this era of the ever-changing software industry, software development companies are moving towards CICD along with frequent releases, while also maintaining the software quality. This requires using really efficient automation testing tools.

There is no dearth of free as well as paid automated tools in the market. But finding the right automation tool that perfectly suits your project is not an easy task.

In this article, we will explore some of the most widely used automation testing tools. We will analyze each tool and also recommend the best one suited for your needs. So, let’s get started.

Selenium WebDriver started as an internal project for in-house usage by ThoughtWorks for web application automation. But within no time became the leading test automation tool with the largest market share.

Ranorex is a commercial UI automation tool introduced in the year 2007 by Ranorex GmbH.

UFT one (formerly known as UFT) is an automated functional testing tool by MicroFocus.

Our recommendation – It is comparatively easier to do scripting in QTP as compared to Selenium but its high licensing cost limits its usage to large enterprises only. Also if your company is already using HP ALM for Test Management Tool or LoadRunner for performance testing then it can be easily integrated with the two.

TestComplete is a paid tool provided by Smartbear for GUI automation.

Our recommendation – Its a paid tool but scripting is easy in TestComplete, so if pricing is not an issue and the majority of stakeholders are from the non-programming background then this tool can be used.

Our recommendations – If you are looking for a paid tool that would completely eliminate the need for scripting and provide your analytics and reporting features then Tosca is the tool for you.

TestSigma is an AI-driven test automation tool developed by Testsigma Technologies using which we can develop automated tests in simple English language.

Our recommendation – If you are looking for a complete test automation suite for web and mobile applications over thousands of combinations of browsers, iOS, and Android devices in simple English then TestSigma is the ideal tool for you.

Our recommendation – Its free version provides a rich set of features for automated test case creation and reporting. So, if you are looking for a tool with most of the features of a paid tool than Katalon Studio is the right tool for you.

Our recommendation – Its storyboarding feature particularly helps non-programmers to contribute to test automation using screenshots. If your company is already using the test management tool – IBM Rational Quality Manager then you can go for RFT as the two can be easily integrated.

TestProject is a free and community-powered test automation framework provided by Tricentis.

Our recommendation – If you are looking for a free tool that provides recording capabilities along with extensive reporting then TestProject is the solution for you.

Watir pronounced as ‘water’ stands for Web Application Testing In Ruby. It is an open-source Ruby library for automating web applications.

This completes our list of top automation testing tools in the market (not necessarily in the same order). If you feel, we have missed any of the popular tools then do let us know in comments.