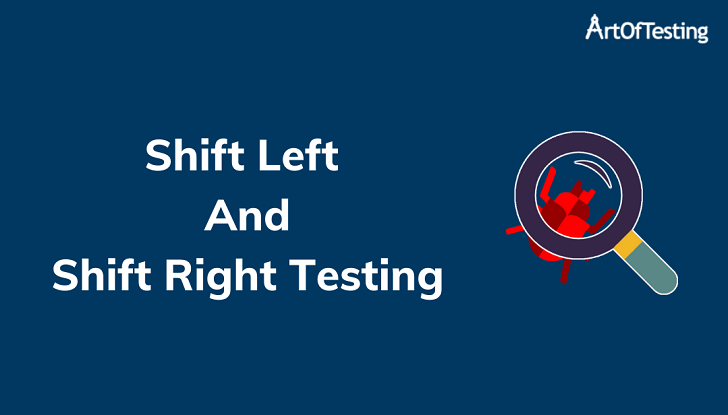 Traditionally, for example, in the waterfall model, the phases of the life cycle were linear. In order to the next phase to start, the previous phase should have been completed. For example, until the development phase completes successfully, the next phase, the testing phase cannot start.

Due to this and many other drawbacks related to the late beginning of the testing phase, a shift left testing approach was introduced.

The term ‘Shift Left’ was invented by Larry Smith in 2001. The name shift left suggests shifting left in the project cycle i.e. starting the testing process early in the project life cycle.

The idea is to find the bugs as early as possible that will eventually cost the organization much less compared to finding any critical bug in the UAT or on the production that would cost more.

What is Shift Left Testing?

In the shift-left testing approach, the testing team is involved early in the project lifecycle. From the initial phases i.e. requirements gathering and analysis part, testers are included in the discussions.

Due to this, the testing team can understand the basics of the requirements. Moreover, they give their inputs on any potential risks, start working on the test strategy, etc.

They can be asked to review the requirements specifications to find any missing and ambiguous requirements. By the time the development phase starts, testers are clear with the requirements. They can start working on the test scenarios and test cases.

If the bugs are found early, the development team has enough time to solve them. As compared to the traditional model scenario where the critical bugs are found late in the testing cycle.

And due to tight deadlines, the project manager is eventually forced to postpone the release.

Before we begin this section, kindly keep in mind the V model as it will help in visualizing the discussion.

There are mainly four types of the shift left approach i.e. there are four ways using which shift left testing can be incorporated in the project lifecycle:

In this approach, instead of system and acceptance level testing, the testing focus is on unit testing and integration testing. In other words, we can say that the focus moves lower down on the right side of the V – model and thus shifting left.

So, in this approach, the shift-left happens by moving to the left. This is done by breaking the single development into increments. The first increment is developed and tested and then move to the next increment and so on. This approach is popular among projects with complex hardware dependencies.

The shift-left approach helps in identifying bugs early in the project lifecycle. But what about the user experience? And system performance once it has been deployed?
The answer is shift right testing.

What is Shift Right Testing?

The shift right testing approach is doing the testing later i.e. once the system is live or the code is deployed on the production. By shifting right, we are moving the testing process on the right i.e. moving it to the post-production stage.

The main goal of this approach is to continuously check the performance and usability of the system once it is available for the real user’s consumption. Also, with the help of the end users, feedback of the system is received.

This approach is mainly used in DevOps. DevOps focuses on delivering rapid and high-quality products. DevOps, as the name suggests, brings the development and operations teams together.

The development team takes help from the operations team. They take continuous feedback from them regarding the features and functionalities.

Moreover, the feedback received from the end-user, production data, end-user usage pattern on the production, etc. can be combined with the AI and ML to develop new and improved features for the system.

This section discusses some of the methods or concepts used in the shift right testing approach.

Both the shift left and shift right approaches are useful for a successful project.

With this approach, the focus is on testing the system once it is deployed on the production. It typically involves the development team, operations team, and end-users of the system.