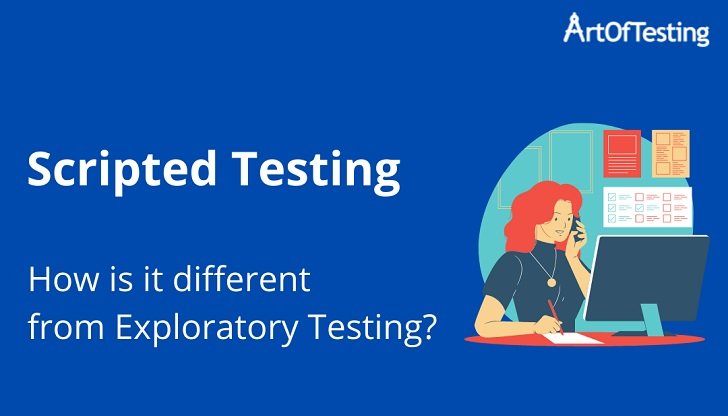 In software testing, there are two approaches that are popular and widely used- Scripted testing and exploratory testing. In this tutorial, we will first discuss scripted testing. Then look at some important differences between both approaches.

In traditional software development methodology, testing is a separate phase that does not overlap with any other phases. For example, in the waterfall model, once the development phase ends, the testing phase starts.

What is Scripted Testing?

There are some advantages of using the scripted testing approach and they are explained below.

Apart from some advantages mentioned in the above section. This approach has some disadvantages.

Difference between Scripted and Exploratory Testing

Exploratory testing is a testing approach where testers test the system while exploring it on the fly without any test documents to refer to.

In this testing, unlike scripted testing, test design, and test execution take place parallelly without any planning. Exploratory testing is mainly useful in projects where rapid deliveries are expected, and frequent changes are integrated.

In such projects, there may not be enough time to create testing documents. And testers may need to test the system frequently and quickly.

There are two schools of thought when it comes to two testing approaches i.e. scripted testing and exploratory testing. There have been many experiments to decide which of the approaches is best.

Both approaches have their advantages and disadvantages. It should be management’s decision when it comes to choosing any one of them. This decision is made based on the nature of the application and development methodology being used.

In this section, we will look at some of the differences between scripted testing and exploratory testing.

A scripted testing approach is one where the testing team has to prepare formal test documents before starting the actual testing. It is a time-consuming process. But at the same time, it gives maximum test coverage. In exploratory testing, testers do not have any formal documentation. They test the system based on their domain knowledge and analytical skills.

Both approaches are useful depending upon the project. The perfect idea for the successful testing process is to use both approaches. One of the ways of mixing both approaches is to perform exploratory testing along with keeping track of what was tested and preparing a detailed bug report.