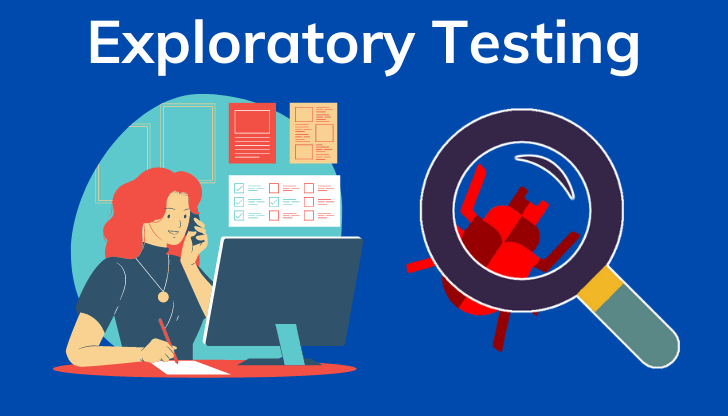 In this tutorial, we will study one of the most popular testing types – Exploratory Testing. We will be studying its types, advantages, disadvantages and at the end the difference between exploratory and scripted testing.

What is Exploratory Testing?

Exploratory testing is a type of testing where testers explore the system on the fly without any pre-prepared set of test documents.

In this type of testing, testers explore the system, perform test design and test execution simultaneously without any proper planning, which means there aren’t any formal or standard documents such as testing plans, test cases, and so on.

This testing practice is mainly used in the agile software development life cycle. Usually in agile projects, developments are rapid and there is little time for the testing process. In such scenarios, exploratory testing can be helpful as it gives the tester the freedom to do what s/he thinks is best to test the system, to find out maximum bugs.

It is also useful where functional specifications are not cleared to the testing team. This is a black box technique. It gives testers full freedom of what to test and how to test, a chance to learn new things, expand their expertise and use these learnings in next the testing process.

Exploratory testing is different from the traditional scripted testing method, where first test plans are made, test cases are designed and then after all this planning, testers test the system based on the available document.

Following are some types of Exploratory Testing:

In scripted testing, in order to start the testing, the requirement documents need to be ready and complete. Based on the requirements document, test cases are prepared to cover all the functionalities of the system. Before the testing process begins, the testing team needs to prepare a detailed test plan.

Exploratory testing is a technique that is not traditional but is a very useful and efficient way to perform software testing. It is scientifically proved that exploratory testing gives more efficiency as compared to scripted testing. It is used to find bugs that have been missed during scripted testing.
Also, it gives the tester the freedom to test in his ways thus increasing their knowledge and thinking.