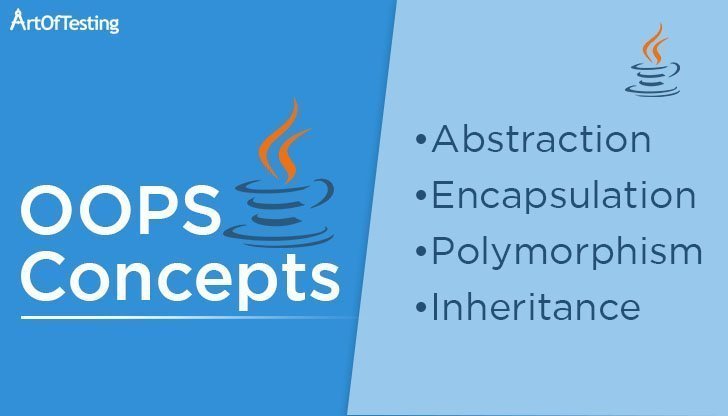 In this article, we will be learning about the OOP concepts in detail, which is the basics of Java programming. Every line of code in Java is inside a class, everything in Java is related to classes and objects. So, it is of utmost importance that we understand these concepts with full clarity. Let us now start.

In the previous article, we had learned briefly about the basic definitions of class and object and saw an example of each. In short, a class is a template that has certain attributes and an object is an instance of a class.

Here is a simple example of the usage of class and object in Java.

The output of the above program will be-

Here’s a brief description of what we did in the above example.

In the above Bank example, we assigned values to the data members in the getData() but that is not the best solution. What if we want to create more objects, then all of them will have the same names and account numbers. Here comes the concept of constructors.

Constructors are special methods. These have the same name as the class name. They have no return type, not even void, and are mainly used to initialize objects, i.e., to initialize the data members of the object. These are implicitly called when an object is created. They are of 3 types-

If we use more than one constructor in the same class with different parameters, it is known as constructor overloading.

Here is the same Bank example with added constructors.

The output of the above program will be:

Now we know how to write a simple class, create objects from it, define methods and initialize the objects using constructors.

Let us now learn the most important concepts of OOPs:

The wrapping of data and related methods into a single unit is known as data encapsulation. To implement encapsulation in Java, we use something known as the Getter and Setter methods. They are used to get and set the values of data members respectively. This is achieved by declaring the class attributes as private and the getter and setter methods as public. An example is as below-

Pretty simple? This is the implementation of encapsulation. Note that we cannot access the data members directly by the object since they are private. So, trying to do that will cause an error. Also, as we were using only one class to write all our methods, the private members could still be accessed by the objects since they were inside one class. In the above example, we provide security to the data by using two classes.

Encapsulation provides flexibility to code, increases control of class and attributes and provides security to data.

In the above example, we have created a class Car and two classes MarutiSuzuki and Hyundai and both are cars in general. So instead of defining attributes modelName and mileage of each of those two, we inherit the properties of Car in MarutiSuzuki as well as Hyundai.

So, both these classes now have the properties of Car which reduced our code and reused it. Note here the use of “extends” keyword while inheriting. Here, the class from which classes are being derived/inherited is known as the “super”/parent class which, in this case, is Car. And the classes which inherit the properties are known as derived/sub/child classes.

If the scope of the data members of the parent class is private, then the subclasses won’t be able to inherit it.

There are various types of inheritance in Java:

There is another type of inheritance – Multiple inheritance where one class is deriving properties from more than one superclass. Java does not support this type. This is becauseit creates confusion when there exist methods with the same name and the same arguments in superclasses and subclasses.

If a class has been declared as “final”, i.e. the class becomes immutable, then we cannot inherit classes from a final class.

Polymorphism means to exist in more than one form. In Java let us consider an example of animals eating food:

Here, the method eats()has been defined for each of the subclasses. When we call these methods from their respective objects, we get the output:

This allows us to perform actions in more than one way.

Data abstraction is one of the OOPS concepts in whichwe show only the essential features while hiding the complex background details. We usually define a class as abstract if we do not want to create any objects from it and is purely written for the purpose of being inherited. To define a class as abstract, we use the keyword “abstract” before class. If we do not want to use the methods inside the abstract class, then we have to declare them as abstract as well using the “abstract” keyword again.

An abstract method has to be overridden in the subclass in order to be used. Overriding a method is redefining the method of the superclass in the subclass for its implementation. An abstract method must always contain an empty body. It may seem like a lot to take in, so let us consider the Animal example. In that example, we never have to use the eats() defined inside the Animal class because every animal has its own characteristic food. So we can declare the Animal class and method eats() as abstract.

When you make the above changes in your Animal class and recompile the code, you may see the error:

Thus, we cannot create objects from abstract classes. The final code will be-

We can also use the annotation @Override above the method we want to override. Method overriding can be really useful when we want to reduce unwanted code in our program. An abstract class can contain abstract as well as regular methods.

We have learned about all the concepts of Object-Oriented Programming in Java. This article was lengthy but very essential at the same time. Learning about object-oriented concepts forms the major part of the Java language. To summarize, we have learned how to create a class and object, how to initialize the object using various types of constructors.

It is a lot to understand so go slow. Make sure you understand everything in detail because this will help you a lot. Practice OOPS concepts. Google for things you didn’t understand perfectly. Experiment with various code modifications, and learn as much as you can. Learning a new language is really fun and exciting. So, make the best out of it and Happy Learning.