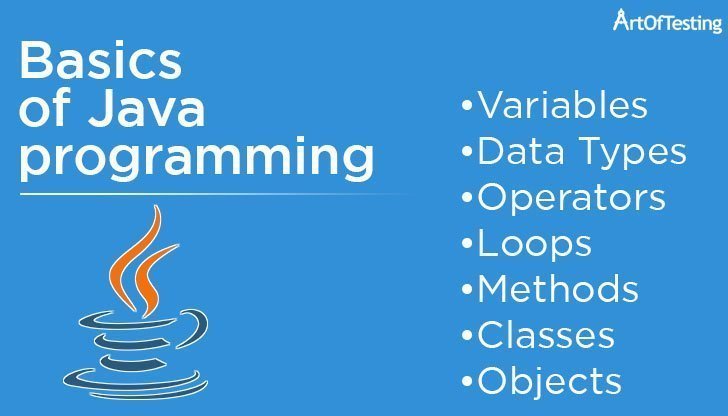 In this article, we are going to learn the Java basics or the core concepts of Java programming. These concepts are absolutely necessary to be able to write or understand any kind of Java program.

In our previous article, we learned about Java download & setup and created our first hello word program. Now, is the time to understand it.

Also known as identifiers, they are defined as a location in the memory where the values are stored. It has a name, a type, and a value. In the above example, the variables are x, y, and product.

These are the words that have special meaning in Java programming. For example – int, main, public, static, void, etc are all keywords. There are a number of keywords in Java and you can easily find them on the internet. Using keywords as identifiers leads to errors.

As the name suggests, datatypes are the types of data that a value can possess. There are two types: Primitive/Built-in datatypes and User-defined datatypes. The primitive datatypes in Java along with their memory size are byte(1 byte/8 bits), short(2 bytes), integer(4 bytes), long(8 bytes), float(4 bytes), double(8 bytes), character(2 bytes), boolean(1 bit). The User-defined datatypes are class, object, string, array, interface. We will be learning about each of them in detail later. In the above example, the datatype used is int(integer).

When we want to check different conditions and perform different sets of instructions, we use this conditional statement. For example, if we want to find the grade of a student based on his marks then-

Notice that I have used the logical AND (&&) operator to express a range in the condition. Also, if the body of the conditional statement is just one line long, then the curly brackets are optional. Otherwise, they are mandatory.

The last condition must not be written with ‘else’ statement. It implies the values that haven’t matched with any of the above conditions. We can also use only ‘if’ without ‘else’ or we can use only one ‘if’ and one ‘else’ depending on the number of conditions and instructions.

It is a multiple branch structure that is used to execute instructions where we can consider only specific conditions. An example for finding the day of the week based on a digit between 1 to 7 starting from Sunday is-

Switch…case is an alternative for if…else. But in switch case, we cannot use a range in the condition part and we can work with only integer or character values in switch case. The ‘break’ statement is known as a jump statement and is used to break and come out of the loop wherever it is faced.

If we do not use ‘break’ here, the next cases will also be executed until a break is encountered. The ‘default’ here is an alternative for the ‘else’ of if..else if..else structure. The switch case structure is usually used for menu-driven programs. Usually, a menu is presented to the user and the instructions are carried out according to the option chosen.

If we want to print numbers 1 to 100, then how can we do it? Surely we cannot write 100 statements printing a number each time. This is the reason we need loops. Loops help in iterating or repeating a certain set of instructions for a number of times. There are three types of loops in Java programming – For, While, Do…while. The syntaxes of each are-

All three are performing the same function but just have different formats. For and While are entry-controlled loops. The do..while is exit controlled as the body of the loop is getting executed at least once even if the initial condition is false.

If the body of the loop contains only one statement then curly brackets are optional. Notice the use of semicolon after while in Do…while and its absence in While. Example of printing numbers 1 to 100 in all three formats are.

The working of ‘for’ loop is according to the below steps:

There is one more For-each loop in Java, for better understanding, we will explain it later in this article after studying Arrays.

There are two jump statements in Java-

1. Continue – This statement is used when we want to terminate a particular iteration of a loop. For instance, in the above loop example, if we do not want to print those numbers which are multiples of 5 then we use continue like.

Methods are basically blocks of code inside curly brackets belonging to a method name which makes the program modular and simpler. The syntax of a method in Java is-

Access_specifier: They set the accessibility of the method in the Java program. They are also known as access modifiers. There are four types of access specifiers in Java: public, private, protected and package. We will learn about these in the next article.

Return_type: It is the data type of the value returned by the method. Yes, a method can return a value. If the method does not return any value, then the return type becomes ‘void’.

Method_name: It is the name of the method which is being defined and will be called. Arguments/Parameters: These contain the values passed on to the method which will be used by the method. They are variables accompanied by their datatype.

A function or method has 3 parts-

Often we will have function declared without having a body, like this-
public int sum(int, int);

The function along with its body is known as the definition of the function. These are usually written outside the main(). Example-

Working of a method

The function call is the first step in the execution of a function. In this example, the values 5 and 10 will be assigned to ‘a’ and ‘b’ respectively. After this, the program will start looking for the function definition above the point where it has been called. If it finds a function declaration, then it will start searching the whole program for the definition.

Method overloading is allowed in Java. It means defining many methods with the same method name but different arguments. Java automatically chooses the function with the matching parameters.

An array is a set of similar values stored in consecutive memory locations.

As the above picture shows, it is an array of 5 elements of type integer having index values from 0 to 4 and consecutive memory locations from 100 to 116 with 4 bytes occupying each element since integer occupies 4 bytes of memory. Arrays are very helpful in programming for manipulating data of similar type.

Now that we have learned about arrays as well as loops, let’s look at something we can do by combining the two. When we want to specifically traverse an array, we use this loop. It starts with the same keyword ‘for’ but the syntax inside the round brackets changes a bit. The syntax is-


An example of using for-each loop is-

Notice how for-each loop is different from the normal for loop in terms of syntax as well as usage. For-each loop can become very handy when we only want to traverse and check any specific conditions for all the elements in an array from the leftmost element to the rightmost, in increasing order of 1.

Alright now, let’s move on to the class and object, which form the heart and soul of Java programming. We will study these in detail, in our next tutorial – OOPS in Java but let’s briefly learn about these here also.

A class in Java is defined as a group of objects with some properties and relationships. As stated earlier, every Java program is inside a class. Thus, it is important to understand what class is. A class can also be defined as a blueprint or a template having certain attributes from which we create objects. For example, a car, chair, table, fruit, etc all are classes. The syntax of defining a class is-

An object is an identifiable, real-time entity with some characteristics and behaviour. An object is an instance of a class. A class can have multiple objects. An object can also be defined as a bundle of data and its behaviour. For example, modelName, colour, mileage are all objects/attributes of the class Car.

We usually create objects of a class in the main(). An example of creating an object of class Car in Java is-

We will learn in detail about classes and objects in the next article.

Comments are non-executable statements used in Java to increase the understanding and readability of the program and anyone else who reads it later. Java allows both single-line and multi-line comments. Example-

Rules for writing a Java program

With this, we reach the end of Java Basics. We learned about variables, keywords, data types, different kinds of operators, conditional statements. We also learned when and how to use loops, methods in Java, Arrays and its structure, Class and Object in Java, comments, and the various rules and few conventions to be followed while writing a Java program.

I hope that you have understood these basics clearly but practice makes a man perfect and I suggest that you start practicing simple Java programs just to get into the habit of coding, to become familiar with the syntax of Java, and obviously to boost up your self-confidence.

Alright then, in the next article we will be learning the Object-Oriented concepts of Java Programming which form the major part of this language.