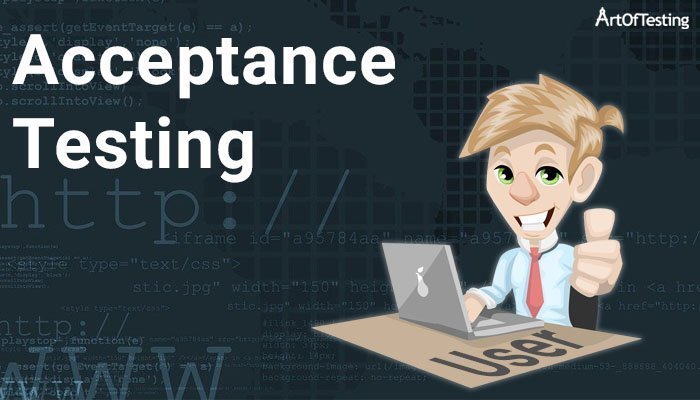 What is Acceptance Testing?

Acceptance testing is the final level of software testing where the system is tested for compliance to its business requirements. It is performed by the client or the end users with the intent to see if the product is fit for delivery. It can be both formal as well as informal.

Along with Alpha and beta testing, we can also classify acceptance testing into the following different types-

User Acceptance Testing – In user acceptance testing, developed application is assessed from the end-users’ perspective, whether it is working for the end-users or not as per the requirements. It is done by employees of the developer organization only. It is also known as ‘End User Testing’ and follows a black box testing mode.

Business Acceptance Testing – Business acceptance testing assesses the developed application from the perspective of business goals and processes. It is to make sure the system is ready for the operational challenges and needs of the real world. It is a superset of user acceptance testing. BAT is performed by an independent testing team. Every member of the team should have precise knowledge of the client’s domain and business.

Contract Acceptance Testing – This type of testing involves checking the developed system against pre-defined criteria or specifications in the contract. The contract would have been signed by the client and the development party.

Operational Acceptance Testing – It is non-functional testing. It makes sure that the application is ready operationally. Operational acceptance testing involves testing the backup or restore facilities, user manuals, maintenance tasks, and security checks.

Before acceptance testing, the application has been tested by the QA team i.e. Internal testing team. QA team will test, and developers will develop the application based on the requirement documents given to them.

They may have their own understanding of the requirements due to a lack of domain knowledge. It is possible that their understanding is different than that of business users. During acceptance testing, business users have a chance to check if everything matches their expectations.

During acceptance testing, business users (clients) get to see the final product. Users can check whether the system works according to the given requirements. UAT also ensures that the requirements have been communicated and implemented effectively. Business users can gain confidence in showing the application in the market i.e. to the end-users.

As acceptance testing will be done by users from the business side, they will have more ideas of what end-users want. Thus, feedback/ suggestions given during acceptance testing can be helpful in the next releases. The development team can avoid the same mistakes in future releases.

Also, an application may have some major or critical issues, such issues should be identified during testing not when the system is LIVE. These issues can be resolved before the code goes to the production environment. This will reduce the efforts and time of developers.

Feel free to ask any questions in the comments section and we will reply at the earliest. Check out our complete step by software testing tutorial here – Software Testing Tutorial.