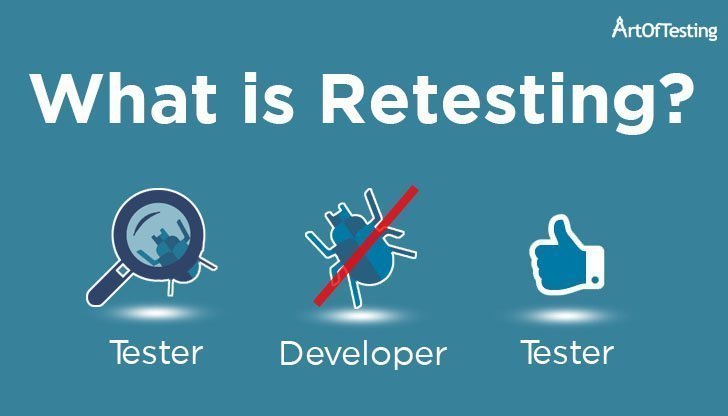 Hello friends, in this tutorial, we are going to study a very important type of testing – Retesting. So, let’s begin.

In the defect life cycle, a tester files a bug whenever a defect is found in the application while testing. This defect will be created in bug tracking software. A project manager or a test lead verifies the bug and it is assigned to a developer to fix it.

Once a developer fixes the bug, the testing team is required to make sure the bug has been resolved. Moreover, the team validates that the fix doesn’t affect the other functionalities of the application. This process of testing the bug once it is solved is called retesting. In the sections given below, we will study this topic in detail.

Retesting is the testing of failed test cases after the bugs coressponding to those test cases have been fixed by the developers. It is planned testing and is also known as ‘Confirmation Testing’.

Once the tester retests the bug and confirms that it is solved, then only the bug can be closed. If the testers find that the bug is not solved then they will reassign it to the developer.

While retesting, a tester will recreate the same scenario to see whether the bug has been solved. A tester is also required to check other functionalities related to the bug to make sure new code changes for this bug are not altering other closely related functionalities.

A tester found a bug stating – “during checkout, after applying a valid discount code, it is not added in the order total calculation of the product”. The tester will file this bug and it will be assigned to the developer.

After this step, two scenarios can happen-

Difference between Regression and Retesting

Many times, people are confused between regression testing and retesting. In this section, let’s discuss a few important points about the difference between these two testing methods or processes.

In the above-mentioned example of the e-commerce website, the first scenario has another possibility. While solving this bug, a developer has made a mistake. Due to which ‘Delivery Charges’ are not added in the total and wrong ‘Total’ is calculated. So, after solving an existing bug, due to the developer’s mistake, another bug has been produced. The original bug has been fixed, but it has affected other functionality of the same page.

Because of such cases, a tester is responsible not only to test the ‘Discount Code Applied’ but also the other amounts added or subtracted in the order total. This is regression testing.

Regression testing is a testing of the software when a new code has been deployed. It is conducted to check whether new code changes have affected other untouched modules of the system.


Important points of difference between retesting and regression testing-

Retesting is an important and required testing type assuring system reliability and flawlessness. It confirms that failed test cases have been solved giving relief to not only testing and development teams but also to the client.

We hope this tutorial was beneficial in understanding the ‘Retesting’ concept. For any query or suggestion, please let us know in the comments.