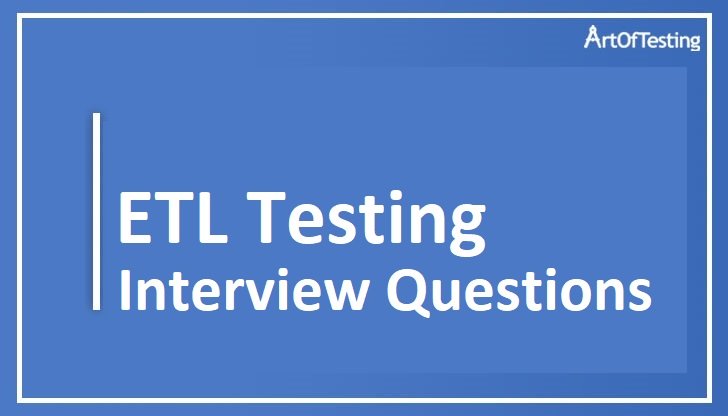 ETL testing is used to verify the correctness of data migration from the source database to the destination database, along with the validation of the transformation rules.
In this article, we have compiled a list of some of the frequently asked ETL Testing Interview Questions. So, let’s begin.

Ques.1. What is ETL?
Ans. ETL stands for Extract, Transform, and Load. These three are database functions and they are performed on the data to pull it out from one or more sources (database) to another (database).

Ques.2. What is the ETL Process?
Ans. ETL process has three steps-

Ques.3. What is ETL Testing? Or What is the importance of ETL Testing?
Ans. ETL testing is performed to ensure the accuracy of the data that is loaded into the destination database. It also makes sure that required data transformation rules are followed and there isn’t any loss of data during the ETL process.

Ques.8. What is a Fact Table?
Ans. A fact table in the dimensional model contains quantitative information about the facts important to the business. Fact tables are used for analysis and they are often denormalized.

Ques.11. What is a Periodic Snapshot Fact Table?
Ans. In this type of fact table, an event can be stored multiple times and it captures the state of the facts at predetermined periods.

Ques.12. What is an Accumulated or Accumulating Snapshot Fact Table?
Ans. An accumulated fact table is the most challenging of all the fact table types and it can be used when a business process has a definite beginning and end.

Ques.13. What is Grain in the context of a Fact Table?
Ans. The grain in the fact table represents the level of detail for a single row.

Ques.18. What are the types of SCD? Explain each of them in brief.
Ans. Types of SCD-

Ques.20. What is Junk Dimension or Dirty Dimension?
Ans. As the name suggests, these dimensions contain junk or random attributes that do not belong to any particular dimension. Such dimensions are created so that in the fact table many foreign keys can be avoided.

Ques.23. What is BUS Schema?
Ans. BUS schema contains conformed dimensions. In other words, it is used to identify the common dimensions across all the data marts of the organization.

Ques.25. What is a staging area?
Ans. A staging area is also known as the landing zone where data from various sources is stored temporarily. A staging area is important as all the data should be available in a single area before it is loaded into the data warehouse or data mart. It is used for storing and cleaning the data before moving it to the target database.

Ques.26. What is ODS?
Ans. ODS stands for Operational Data Store. It is used for operational reporting on the data stored from various data stores. Also, it contains the snapshot of the latest data from these sources.

Ques.27. What are active and passive transformations? Explain them in brief.
Ans. Active Transformation – In this type of transformation, when the data is passed to the target database from source, the number of rows is changed.

Passive Transformation – In this type of transformation, when the data is passed to the target database, the number of rows is not changed.

Ques.28. What is Data Purging?
Ans. Data purging is the process of removing or erasing junk data from the data warehouse. It is usually done to free-up the database space.