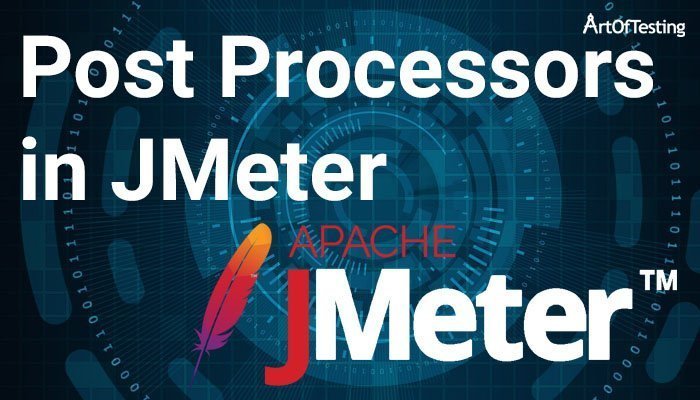 The Post Processors are the test plan elements that are used to perform certain actions after the processing of a sampler request. These post processors are usually used for extracting certain values from the response of a sampler request e.g. we can extract the value of session variables from an HTTP request and pass the session variable’s value to the subsequent requests. How to add a Post Processor in JMeter-
Right Click on either of Thread Group/Logic Controller -> Hover over ‘Add’ -> Hover Over ‘Post Processors’ -> Click on the required Post Processor Element

Regular Expression Extractor is the most frequently used post-processor. It is used to extract values from HTTP response using regular expression and to store the values to a variable. Then the variable can either be used as a request parameter to other samplers or can be used for other purposes like assertions, debugging, storing in the file, etc.

The BeanShell PostProcessor is used to perform some operation using BeanShell scripting after a sampler request processing.

The CSS/JQuery Extractor is used to extract values from HTTP response using CSS or JQuery expressions and then the extracted value is stored in a variable.

The Debug PostProcessor is used to create a subSample having properties of previous sampler requests, JMeter properties, JMeter variables or system properties.

The JSR223 PostProcessor is used to perform some operation using JSR223 scripting after a sampler request processing.

The JDBC PostProcessor is used to execute certain specified SQL queries after a sampler request processing.

The Result Status Action Handler is used to stop a thread group or the whole test in case of a specific sampler failure.

That’s all we have in this section, please share it with your friends and colleagues. Check out the complete JMeter tutorial here.