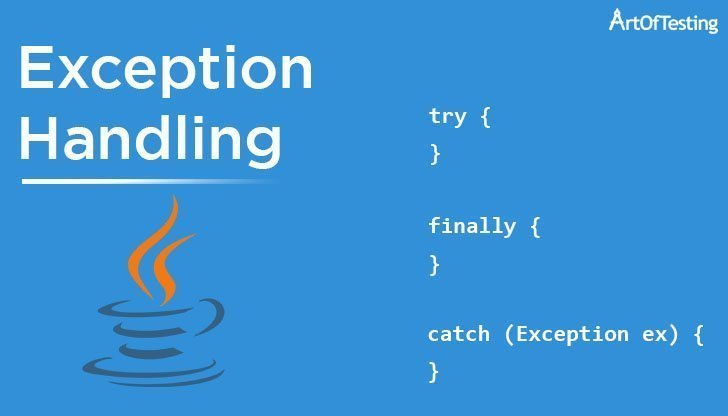 In this article, we will be learning about exception handling in Java, what they are, how do they arise, and how to handle them for the smooth flow of the program. Exception handling is one of the most important features of Java and one of the reasons why it is such a powerful language. So, let’s begin with the definition of an Exception.

What is an Exception in Java?

An exception is an unwanted or unexpected event that occurs at the time of execution. It disrupts the normal flow of the program which often leads to termination of the program or application.

Exceptions in Java can occur due to several reasons like trying to access an element of an array with an index greater than the size of the array, trying to access a non-existing file in your program, invalid data input, network problems, etc. Fortunately, Java has a robust system for handling such errors to prevent the termination of the program.

Difference between Error and Exception

An error is something that cannot and should not be handled by the developer. It usually tends to signal the end of your program. Also, signals that the program cannot recover and causes you to exit the program altogether instead of trying to handle it.

Exceptions can and should be handled by the developer. Otherwise, they will surely lead to abnormal termination of the program. They are objects of a type ‘System.Exception’ class and arise when non-fatal and recoverable errors occur during run-time.

What is Exception handling in Java?

Compile and execute the above-mentioned code. You will notice that it is successfully compiled but shows an error after trying to execute. Exceptions occur at runtime, therefore, the code was successfully compiled and the compiler found no error in it. But the JVM caught an exception and displayed a message like this-

This message is quite non-user-friendly and won’t make any sense to a lot of users. Thus, we use exception handling to display a user-friendly and understandable message to the users so that they will be able to figure out what went wrong. Now let us see how we can handle the above exception-

I have added the try and catch blocks and handled the exception here. We will study in detail about these blocks in the coming section of the article. For now, you can just copy-paste the code and compile & run it. You will now see a user-friendly and understandable message that you have written for the exception – “Division by zero has occurred”.

In Java, we have two types of exceptions-

Now let us study the keywords used in Exception Handling in detail.

A try block must always be followed by a catch block or finally block or both.

The Throwable class is the super-class of all the errors and exceptions in Java. In the previous example, the class ArithmeticException is an instance of a Throwable class and is thrown by the JVM to handle the arithmetic exceptions. To declare the exception type that the catch block will handle, we need to know the type of Exception that can be thrown by the JVM in the try block. The syntax of the catch block is-

A few points to be remembered for the try-catch block are:

An example to demonstrate the use of multiple catch blocks is-

The lines contained inside the ‘finally’ block will be executed whether or not an exception occurs. This block is written after the end of all the catch blocks. This block is not just useful in handling exceptions but also helps the programmer to avoid cleaning up the code that may have been bypassed by a continue, return or break statement. For example, we can have statements in ‘finally’ that close the database connection. So that even if there is an exception, we are sure that the database connection will get closed. Finally syntax-

For a catch block to handle an exception, it must be thrown by someone or something. Either the programmer throws it or the JVM does it. But in either case, the keyword throw is used. We have seen that an instance of the Throwable class has been thrown whenever an exception arises.

An example to find out whether a student is eligible to sit for an exam based on his/her age. If he/she is older than 15 years, he/she will be eligible for the exam otherwise not. Here, we can explicitly throw an exception with a suitable message with a condition based on age. Here’s the code.

The output will be-

In the above code, we have explicitly thrown an ArithmeticException with a message under a condition. We have enclosed it in a try-catch block and display the message of the exception using the in-built method getMessage(). In this way, we can define custom errors using the throw keyword.

In the above example, we used the throws keyword in the signature of the main() thus, JVM directly handled the exception we explicitly invoked. Another example-

In the above example, I have used two Exceptions with the method artOfTesting() which is allowed in Java with the use of commas.

Calling the super() here is not mandatory but a good practice. The constructor takes a String as an argument. But this is also not mandatory and we can leave it null. The above code will produce the following output – “Custom Exception has occurred”.

Exception Handling is an important part of Java programming since every developer needs to handle exceptions to prevent the application from crashing. So, it is very essential to know how to create, throw, and handle exceptions in Java. Hope you understood all the concepts properly and will be able to apply them. Continue learning!