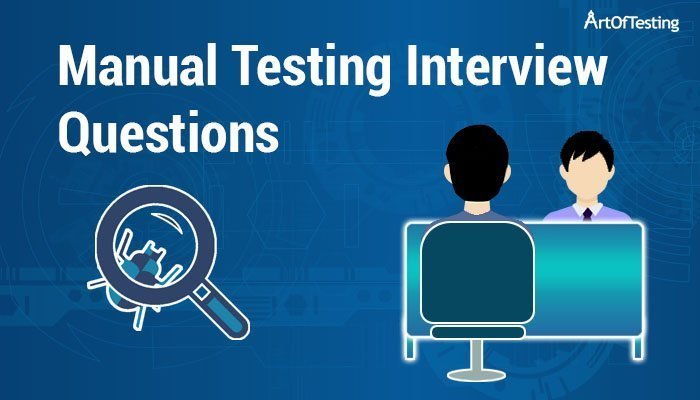 Ques.76. What is the difference between regression and retesting?
Ans. Regression testing involves testing the application to verify that a new code change doesn’t affect the other parts of the application. Whereas, in retesting, we verify if the fixed issue is resolved or not.

Ques.77. What is the difference between black-box and white-box testing?
Ans. Black-box testing is a type of testing in which the internal architecture of the code is not required for testing. It is usually applicable for system and acceptance testing.
Whereas white-box testing requires internal design and implementation knowledge of the application being tested. It is usually applicable for Unit and Integration testing.

Ques.81. What is dynamic testing?
Ans. Testing performed by executing or running the application under test either manually or using automation.

Ques.82. What is an exit criteria?
Ans. An exit criteria is a formal set of conditions that specify the agreed-upon features or state of the application in order to mark the completion of the process or product.

Ques.84. What is pilot testing?
Ans. Pilot testing is testing carried out as a trial by a limited number of users to evaluate the system and provide their feedback before the complete deployment is carried out.

Ques.88. What is mutation testing?
Ans. Mutation testing is a type of white box testing in which the source code of the application is mutated to cause some defects in its working. After that, the test scripts are executed to check for their correctness by verifying the failures caused the mutant code.

For other test scenarios check our Test Scenarios Examples section.

Ques.94. What should be the psychology testing?

The two main stakeholders in the software development life cycle – Testers and Developers have different mindsets while approaching an application. Testers tend to have a more stringent approach to examining the software. Most of the time they are looking to “break the application”. Whereas, developers have the mindset to “make the application work”.
ISTQB has defined certain psychological factors that influence the success of testing-

Ques.95. What is the difference between testing and debugging?
Ans. Testing is primarily performed by the testing team in order to find the defects in the system. Whereas, debugging is an activity performed by the development team. In debugging the cause of the defect is located and fixed. Thus removing the defect and preventing any future occurrence of the defect as well.
Another difference between the two is – testing can be done without any internal knowledge of software architecture. Whereas debugging requires knowledge of software architecture and coding.

Ques.96. Explain the Agile methodology?
Ans. The agile methodology of software development is based on an iterative and incremental approach. In this model, the application is broken down into smaller build on which different cross-functional teamwork together providing rapid delivery along with adapting to changing needs at the same time.

Ques.97. What is scrum?
Ans. A scrum is a process for implementing Agile methodology. In scrum, time is divided into sprints and on completion of sprints, a deliverable is shipped.

Ques.99. What is a scrum meeting?
Ans. A scrum meeting is a daily meeting in the scrum process. This meeting is conducted by scrum master and update of the previous day’s work along with the next day’s task and context is defined in this meeting.

What is a test plan?

A test plan is a formal document describing the scope of testing, the approach to be used, resources required and time estimate of carrying out the testing process. It is derived from the requirement documents(Software Requirement Specifications).

What is a test case?

A test case is used to test the conformance of an application with its requirement specifications. It is a set of conditions with pre-requisites, input values and expected results in a documented form.

What is defect density?

Defect density is the measure of the density of the defects in the system. It can be calculated by dividing the number of defects identified by the total number of lines of code(or methods or classes) in the application or program.

What is defect priority?

What is defect severity?

Defect severity is the severity of the defect impacting the functionality. Based on the organization, we can have different levels of defect severity ranging from minor to critical or show stopper.